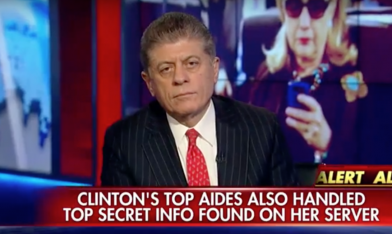 A new report alleges that at least a dozen e-mail accounts, including some used by Hillary Clinton’s top aides, handled the “top secret” intelligence found on Clinton’s server.

According to the report, some of the e-mail accounts in question belonged to top Clinton aides, including Cheryl Mills, Huma Abedin, Jake Sullivan and Philippe Reines.  Additionally, an e-mail account belonging to State Department Under Secretary for Management Patrick F. Kennedy, a central figure in the Benghazi investigation, was also said to be included in the e-mail chain that exchanged this information.

“One, Mrs. Clinton was so reckless in the manner in which she sent out top secret emails, knowingly sending them to people who weren’t authorized to receive them; … two, that [her aides’] acceptance, discussion and transfer of this is a felony; and three, … that the FBI now has leverage… [in that] the Justice Department can indict her top aides and trade with them… [to get]…testimony against Mrs. Clinton in return for a deal with them.”

Also on Thursday, a federal judge ordered the State Department to release all remaining undisclosed Clinton e-mails by February 29. I wrote a recent article about why there is enough evidence for  Hillary Clinton to be indicted.  LawNewz.com’s founder Dan Abrams disagrees with both me, and Judge Napolitano. Abrams said in a recent piece  that based on what we know right now, there is not enough evidence to charge Clinton.