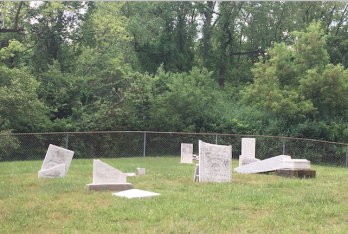 A historic family cemetery with headstones dating back to the Revolutionary War was desecrated over Memorial Day Weekend, causing shock and outrage amongst the residents of Flat Rock, Michigan.  The sentiments were quickly channeled into positive action, including a social media campaign led by the Flat Rock Historical Society.  The social media campaign led to several tips and on Tuesday, Flat Rock police announced those tips led them to juvenile suspect who police believe is responsible for the vandalism.

Lesley Harkai, a member of the Flat Rock Historical Society, told LawNewz.com that the Vreeland Family Cemetery was one of the oldest cemeteries in the Flat Rock area, started by the family of Revolutionary War patriot Michael Vreeland.  Although Micheal’s remains were subsequently moved to a different cemetery by his descendants some years ago, his original headstone remains at the Vreeland Cemetary location to this day.  Furthermore, other Vreeland Family members remain buried in the original plot, including relatives that fought in the War of 1812 and the Indian Wars.

On the Saturday of Memorial Day Weekend, Harkai says that some visitors to the cemetery noticed the damage and notified the police.  Harkai says when she learned of the damage from the Flat Rock Historical Preservation Chair, she grabbed her camera and snapped several photos of the damage to put up on Facebook in the hopes of getting the word out.

In the Facebook post, Harkai noted that the Vreeland Family Cemetery had just undergone a lengthy restoration process that was completed in 2014.  Now, all that work was basically undone by the Memorial Day vandal.  Harkai says the response was overwhelming, with offers of donations and help coming from all over the country.  Members of the Vreeland family — far removed from Flat Rock — even reached out to help.  Harkai says the outpouring of support was definitely appreciated, but the Facebook post was even more helpful as a tip line.

“I received two private Facebook messages from people, independent of each other, that both told me the same thing,” Harkai tells LawNewz.com.  According to Harkai, those tipsters claimed another juvenile had been bragging about the crime.

“I took screenshots of my conversations with both [tipsters] and sent the information to the police,” Harkai says.

Police then went to investigate the tips and on Tuesday announced on Facebook that they “have positively identified a juvenile suspect responsible for the headstone and marker damage at the Vreeland Cemetery.”

Police have not announced what charges they might bring or named the juvenile suspect.  One local television station report indicates the suspect may have been angry over a girl and decided to take it out on the headstones.

Harkai said she is relieved that the juvenile was caught and even showed willingness to support a lighter sentence or lesser charges if the juvenile helps in the cemetery cleanup process.

“There is talk locally about getting him involved in the cleanup as part of his punishment,” Harkai said.  “The Flat Rock Historical Society would support that.”

In the meantime, Harkai says the community has really come together over this incident.  “We are in recovery mode, working to get quotes” to estimate the cost of repairs.  While it might take some time, Harkai is confident the community will find a way to fully restore the cemetery.