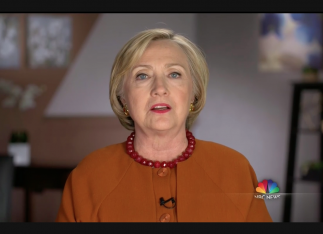 A New York Times article on Monday highlights an apparent controversy brewing in the wake of Democratic presidential candidate Hillary Clinton’s response to a question about abortion from moderator Chuck Todd on NBC’s Meet the Press.

Here is the transcript of the relevant portion of the exchange:

When, or if, does an unborn child have constitutional rights?

Well, under our laws currently, that is not something that exists. The unborn person doesn’t have constitutional rights. Now, that doesn’t mean that we don’t do everything we possibly can, in the vast majority of instances to, you know, help a mother who is carrying a child and wants to make sure that child will be healthy, to have appropriate medical support.

It doesn’t mean that you don’t do everything possible to try to fulfill your obligations. But it does not include sacrificing the woman’s right to make decisions. And I think that’s an important distinction, that under Roe v. Wade we’ve had enshrined under our Constitution.

As the Times notes, Clinton’s remarks were not well received by some on the Left.  In fact, some progressive abortion rights advocates were bothered by Clinton’s remarks because, according to the Times, they believed Clinton’s “characterization of the unborn as a person shamed women who choose to terminate a pregnancy.”

As an example, the Times chose to highlight a tweet from Diana Arellano, a self-described abortion activist (who the Times noted was also a Planned Parenthood of Illinois employee) that accused Clinton of further stigmatizing abortion in her answers on Meet the Press.

Arellano was apparently none too pleased with how the Times represented her tweet in the story, as evidence by her follow up tweet after the story was published.

Since some people are unclear, my tweets are my own opinions and not a reflection of where I work https://t.co/TKRSIK23EC

The Times article also noted criticism that Clinton received from the conservative Pro-Life groups for her response on this issue.

And just like that, Hillary Clinton has now managed to do what was previously thought could only be accomplished by Donald J. Trump– unite the Pro-Life and abortion rights advocates together in outrage over a response to a question about abortion.