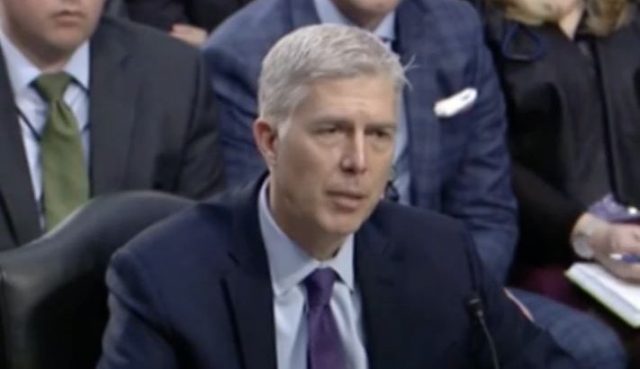 On the second day of the confirmation for Supreme Court nominee Neil Gorsuch, the judge faced questions from the Senate. Patrick Leahy of Vermont got right into it and asked Gorsuch for his feelings about Merrick Garland, the Chief Judge of the D.C. Circuit who was nominated by President Barack Obama, only to be ignored by Senate Republicans, allowing President Donald Trump to nominate Gorsuch instead.

“Whenever I see his name attached to an opinion, it’s one I read with special care,” Gorsuch said about Garland. “He’s an outstanding judge.”

Sen. Leahy wasn’t going to let it go at that. “Do you think he was treated fairly by this committee, yes or no?” he pressed.

But Gorsuch, who has handled himself with grace throughout his nomination process, wouldn’t take the bait. “I can’t get involved in politics and there’s judicial canons that prevent me from doing that,” he said. “I think it would be imprudent of judges to start commenting on political disputes between themselves and the various branches.”

Leahy also noted how Gorsuch called Garland after his nomination by President Trump.

Watch the hearing live in the player below: