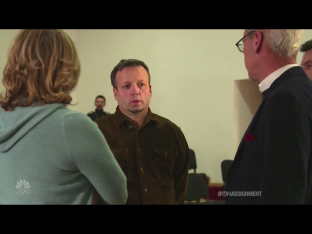 As LawNewz.com reported last week, the NBC News interview included explosive new claims from Guccifer that he not only hacked into Clinton’s e-mail account, but he also claimed to have gained “total access” to Clinton’s entire private e-mail server.

Clinton campaign spokesman Brian Fallon has repeatedly denied Guccifer’s claims.  In response to the NBC News report, Fallon said, “[It] has been reported that security logs from Secretary Clinton’s email server do not show any evidence of foreign hacking.”

However, amid all the hoopla surrounding this report — including LawNewz.com’s own report questioning why NBC News decided to sit on this interview for over one month — one aspect of the Guccifer interview has gone almost completely overlooked.

As McFadden sat down with Guccifer to start the interview he suddenly asked to speak privately for a moment.  However, the cameras kept rolling and, according to McFadden’s voiceover, Guccifer asked for payment to go through with the interview.

“We can’t pay for interviews,” McFadden responded.  “It is just against NBC rules.  It’s against network news rules.”

Guccifer then makes good on his promise and walks away, telling McFadden, “In this case, I am sorry.  I am not going to take the interview.”

In another voiceover, McFadden is heard saying, “A few minutes later, [Guccifer] dropped his demand.”

As she is saying this, the camera cuts to view that shows McFadden, Guccifer and an unidentified man who appears to be part of the NBC News team, all standing around together presumably discussing how to go forward. At the point they seemingly reach that agreement, Guccifer appears to nod his head and says, “Okay, we’ll do the interview.”

The group then breaks up and the interview goes forward.

Although McFadden does say Gufficer dropped his demand, she does not provide further specifics as to what caused him to change his mind about the interview.

LawNewz.com reached out to NBC News for comment but have not heard back.