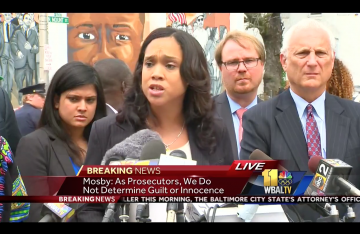 Baltimore State’s Attorney Marilyn Mosby struck a defiant tone on Wednesday in announcing the decision to drop all remaining charges related to the death of Freddie Gray. Nonetheless, the embattled State’s Attorney continued to justify her decision to file charges against the six officers, reaffirming her belief that Gray’s death was the result of a homicide.

Mosby began the press conference by expressing frustration with the judge’s gag order, which she said forced her office to remain silent in the face of criticism.

“For over a year my office had been silent, despite being threatened, mocked, ridiculed and harassed,” Mosby said.

She took aim at the Baltimore Police Department, appearing to accuse some in the department of trying to stonewall the investigation.

“There was a reluctance and obvious bias that was consistently exemplified not by the entire police department, but by individuals within the police department at every stage of the investigation which became blatantly apparent,” Mosby said.

Mosby ultimately concluded that it would be impossible to obtain a conviction without changes in the criminal justice system.

“It has become clear that without being able to work with an independent agency from the start, without having a say in the election of whether our case proceeds in front of a judge or jury, without real … substantiated reform within the justice system, we could try this case a hundred times and end up with the same result,” she said.

At the end of the press conference, Mosby refused to take questions from the media, citing the pending civil litigation brought by several of the officers she charged in the case.  The announcement to drop the charges came after three officers were acquitted and a fourth officer’s trial ended in hung jury last year.