Elections Board Director Denies Claims That Thousands of Voters Were Disenfranchised 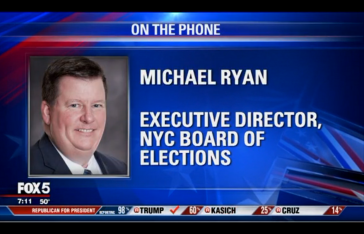 Executive Director for the NYC Board of Elections, Michael Ryan, called into FOX 5’s “Good Day New York” on Wednesday morning to respond to reports of voting issues and claims made by NYC Comptroller Scott Stringer and Mayor Bill DeBlasio that at least 125,000 Democratic voters in Brooklyn were purged from the rolls ahead of yesterday’s presidential primary contest.

“The voter rolls in Brooklyn were part of a routine list maintenance process and the information that I’ve received, which I haven’t been able to concentrate on because (go figure we were putting on an election yesterday) is that this was part of a routine process,” Ryan told Fox 5.  “No one was disenfranchised.”

The Fox 5 anchors pushed back, saying both Mayor DeBlasio and Comptroller Stringer seem to view what allegedly happened in Brooklyn yesterday as anything but routine.  Ryan, however, continued to disagree with the notion, but he did say that the NYC Board of Elections would review the matter in coming days after they complete their work to certify the election.

Ryan then blamed much of the confusion yesterday on a concerted effort by people that he believed were attempting to protest New York’s closed primary process.

“I will tell you, yesterday though, what we did see was a concerted effort by some folks, to apparently, protest New York’s closed primary process, by showing up to vote when they weren’t registered to vote, Ryan said.  “We tracked down dozens of voters who say they were disenfranchised and as it turns out, they weren’t registered in the party that they were trying to vote for.”

Ryan’s statements on Wednesday morning are directly at odds with the recent comments of Comptroller Stringer.  As LawNewz.com reported on Tuesday, Comptroller Stringer ordered an audit of the New York City Board of Elections in response to widespread claims of Democratic voter disenfranchisement in Brooklyn in the Empire State presidential primary.