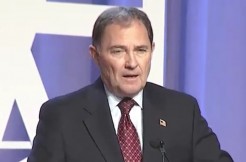 “This isn’t just a religious moral issue,” said Republican state Sen. Todd Weiler, according to CBS. “Some people want to make this about sex education. No boy or girl needs to see those images to learn how families are created.”

Sponsor: I was “mocked and scorned” by media when pornography as health crisis resolution introduced @KSL5TV #utpol pic.twitter.com/kk2TJKj5VW

The resolution’s full text can be read here.