Documentary Claims to Have Finally Solved Tupac and Biggie Murders 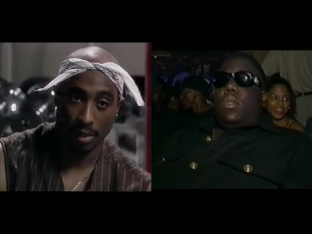 It was 19 years ago today that the one the most legendary figures in hip hop music was murdered outside the Petersen Automotive Museum in Los Angeles. Early in the morning of March 9, 1997, Christopher Wallace, better known by his stage names Biggie Smalls or the Notorious B.I.G., was shot four times while leaving an awards show after party. From almost the moment he was gunned down, it was widely speculated that Wallace was killed in retaliation for the murder of another hip-hop legend, Tupac Shakur, who was killed in a similar manner six months earlier in Las Vegas.

According to the film, in 1996 Sean “Diddy” Combs told a group of Southside Crips in LA that he would pay a $1 million bounty out to have Tupac Shakur and Suge Knight killed, and in turn, Knight paid $25,000 to have Biggie Smalls killed in retaliation for the Tupac killing.

Most shockingly of all, however, is the claim that the LAPD instructed the task force to drop the investigation in 2009 because the actual shooters were dead and the department did not want a high profile showdown with Combs, who had become one of the most powerful men in the entertainment business in the years following Wallace’s death.

The two-hour documentary chronicles the ups and downs of a three-year investigation that began in 2006 with the creation of a task force that was ordered to re-investigate the murders and ultimately bring a resolution to the case. The fact that the Wallace family had also filed a $400 million lawsuit against the department based on theory that rogue LAPD cops working for Knight’s Death Row Records orchestrated the killing provided an increased urgency for investigators to find out what really happened.

According to Kading, the task force was given a mandate to follow the evidence wherever it took them, even if it meant the possibility of exposing the department to liability for the actions of rogue cops. The case was federalized so as to avoid any conflict of interest in the event LAPD officers were involved in the murder.

“We knew that in the event we were able to exonerate the LAPD, we would need to credentials of those federal agencies … to say that [they] also found the LAPD to not be be not culpable [in the murder],” Kading said in an interview with LawNewz.com.

Ultimately the investigation would stretch from Compton, CA to Harlem, NY, and as a result of undercover drug stings and taped confessions, Kading said the investigative task force was able to conclude that Orlando “Baby Lane” Anderson was responsible the shooting of Tupac Shakur. Anderson himself was killed in 1998 in Compton, CA during a botched drug deal.  As for the Wallace murder, he claims the task force determined that Suge Knight paid a man named Wardell “Poochie” Fouse to kill Wallace in 1997 in revenge for Tupac’s murder. Fouse was killed in unrelated shooting in 2003.

According to Kading the investigation was dropped once the task force conclusively proved the department was not involved in the murders in 2009.  Kading cites the fact that the two shooters are dead as part of the reason, but also says the department lacked the desire to take on a powerful figure like Sean Combs.

Kading’s 22-year career on the department also came to an abrupt end in 2009 after a federal judge found that he had misquoted a wiretap conversation on a search warrant application.  He was later cleared of any wrongdoing after an internal investigation but he decided to retire after becoming frustrated what he viewed as bureaucratic stubbornness within the department.

While he does have much hope in any prosecutions resulting from his work on the task force, Kading said that since the release of the documentary he has had some “interesting” responses from people finally coming forward who likely would’ve known what happened at the time of the murders.

“Now that the documentary is coming out and getting more and popular a lot of notable people in the music industry and on the street are stepping forward and silently nodding their head … saying [the documentary] nailed it,” Kading said.  He also said that he feels confident in his conclusions that if he ever was sued by Combs  he believes he would win.

Now that he is retired, Kading told LawNewz that he does some private investigative work but for his next big project he is working on another documentary film about the history of Death Row Records.

The documentary, titled “Murder Rap: Inside the Biggie and Tupac Murders,” was released in 2015 and became available on iTunes last month. It is expected to debut on Netflix later this spring, although no official release date has been set. The film is based on Kading’s book of the same that he self published in 2011.

For his part, Sean “Diddy” Combs denied the allegations, calling them “pure fiction and completely ridiculous.”