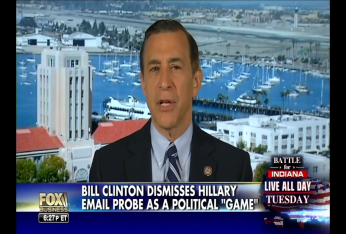 Republican Congressman Darrell Issa, the former chairman of the House Government Oversight Committee, was asked on Sunday about Bill Clinton’s recent dismissal  of the FBI investigation into his wife’s private e-mail server as a “game.”  Congressman Issa told Fox News host Maria Bartiromo  that he believes the FBI will likely have to extend its investigation well past the November election.

Wait, I thought David Shuster reported that the FBI is wrapping up the investigation?  Maybe Schuster got that from the same source that told him Karl Rove was going to be indicted in the Valerie Plame affair.

According to Issa, he believes the FBI is uncovering so much evidence of wrongdoing that it will essentially have to bifurcate the investigation into two parts.  Issa believes the Bureau will separate out, to the extent possible, Hillary Clinton’s conduct related to the e-mails and server and focus on completing that portion of the investigation prior to the election.

“What’s happening in the investigation is, I think, the FBI is running into a problem that there is too much to investigate,” Issa said. “I believe they are going to have to make a summary finding as to her violations of the National Records Act, her taking of the documents and, of course, the classified portion.”

“They are going to have to leave the actual activities with [close Clinton family confidant] Sydney Blumenthal … and [Hillary’s] push to coordinating her activities and … the Clinton Foundation [activities] … until after the election,” Issa said.

Issa explained that the pay-for-play allegations related to the Clinton Foundation are likely the most complex and difficult aspects of this entire investigation.

“Well, the Foundation business is complex … it’s the kind of thing that can take the FBI a long time, Issa said.

While the questions surrounding Clinton’s use of the private e-mail server whether she broke the law are fairly obvious and easy to answer, according to Issa.

“President Clinton … he understands that when you and your staff are communicating things, you are creating secret documents,” Issa said.  He went on to dismiss the Clinton defense that “well, they weren’t classified at the time” as ridiculous, saying it should cause voters to questions whether Clinton is qualified to hold the highest office in the land.

The Democratic frontrunner’s campaign denies any wrongdoing on behalf of the Clinton’s.  In fact, Hillary Clinton recently laughed off the idea of an indictment, telling Matt Lauer on Today that Republicans who think she’ll be indicted live in a “world of fantasy.”