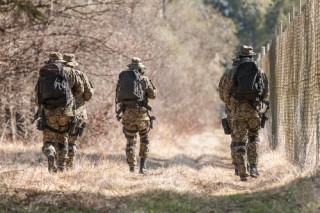 New research, partially funded by the U.S. government, found that the increased border enforcement over the last thirty years “has backfired as a strategy to control undocumented immigration between Mexico and the United States.” The researchers also found the further militarization of the border is a waste of money.

Donald Trump has made securing the border — specifically building a fence – a central campaign promise if he is elected as President. The estimated cost of such a plan is in the billions of dollars.

“It is a waste of taxpayers’ money, not only because massive border enforcement backfired in the past, but even more because the net volume of undocumented migration has been zero or negative since 2008,” he told LawNewz.com in an email.

The study, Why Border Enforcement Backfired, first appeared in the American Journal of Sociology in March, and is part of the Mexican Migration Project at Princeton’s Office of Population Research. The study was partially funded by the U.S. Department of Health’s National Institute of Child Health and Human Development.

Massey told LawNewz.com the build-up of border enforcement from 1986 to 2010 failed to stop the inflow of migrants, and instead backfired by reducing the out-flow of migrants back to Mexico

“[That] increas[ed] the net volume of immigration and doubling the rate of undocumented population growth. The miltarization of the border increased the costs and risks of border crossing, so migrants minimized border crossing by settling in the US rather than moving back and forth,” he said.

The study’s findings have already come under fire from conservative groups like Judicial Watch.

“The findings, in the midst of a border migration crisis that includes Islamic terrorists, could lead some to wonder what the taxpayer-funded researchers were smoking when they compiled this one,” the organization wrote in a blog post.

In the meantime, the porous southern border has created a huge national security risk and the region is a cesspool of violent criminal activity perpetuated by heavily armed Mexican drug cartels that have joined forces with Islamic terrorists to enter the U.S. Judicial Watch has reported on this for years and in fact, back in 2011 cited a Texas Department of Agriculture report confirming that Mexican drug cartels have transformed parts of the state into a war zone where shootings, beheadings, kidnappings and murders are common.