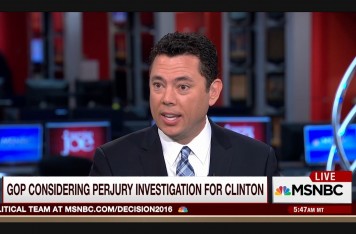 Congressman Jason Chaffetz on Monday appeared on Morning Joe where he discussed the materials gathered by the FBI during its year-long probe of Hillary Clinton’s private server.

After spending the first half of the segment discussing new reports about the Clinton Foundation, Chaffetz was asked whether he had seen the materials the FBI turned over to Congress late last week.

Chaffetz said he had seen only some of them and then reiterated some of the same problems Sen. Chuck Grassley mentioned last week about the documents being commingled — classified and unclassified materials together.  He then mentioned two additional issues that he has with the materials.

“Hillary Clinton is out there saying there’s not very much sensitive information in there, that she didn’t trade in sensitive classified information. It’s so sensitive and so classified that even I as the chairman of the Oversight Committee don’t have the high level of clearance to see what’s in those materials,” Chaffetz told the panel.

Chaffetz then mentioned another other issue he has in all of this, saying it is “stunning” to him that the FBI turned over a second set of materials on Sunday in a classified setting that were different from an earlier set of materials sent over by the FBI.

“So we have a second set of documents that’s now different,” Chaffetz said. “When you turn them page by page, they’re different. I don’t know why that happened.”

Asked by regular panelist Mike Barnicle to clarify what he meant and to explain the difference, Chaffetz exclaimed, “Well, there new information!”

Chaffetz was careful not to question the motives of the FBI and made it clear he was not accusing them of trying to protect Clinton — or even implying as such.  They just simply want to know why there is a difference.  Here is how Chaffetz explained his thoughts on the discrepancy:

“Well here’s the full set of documents and then they give a copy by definition that would be the same, they’re not. You start turning the page and suddenly there’s new documents, new information in there and, so, we’re going back to square one. We’ve only had them for days and, still, the second copy is different than the first copy. Why is that?  I don’t know.”

Chaffetz added, “But it’s more information. The stuff that we saw in the short time before on the train to come up here to be on the show was that it was just flat-out embarrassing.  There was nothing classified about it. Name-calling, things like that.”

Barnicle and the other panelists wanted to know who was doing the name calling, but Chaffetz wouldn’t bite.  Instead, he half-jokingly said not knowing should incentivize the media to press harder for the disclosure of the material.