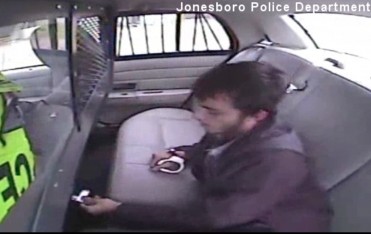 A police cruiser in Jonesboro, Arkansas struck a manhole cover, causing it to roll over several times, hospitalizing the police officer and ejecting the inmate through the rear window of the car.  Jonesboro police essentially told reporters over the weekend the inmate has no one to blame but himself.

WREG news reports Officer Justin Thompson was transporting inmate Logan Younger, 19, to the Craighead County Jail late last week.  Younger was placed in the back suspect cage compartment of the police cruiser for transport.  Yet, at some point during the ride, Younger managed to slip his handcuffs and became “disorderly and aggressive,” according to police.

A camera in the back passenger portion of the vehicle captured video of the entire incident and it was released by the Jonesboro Police Department over the weekend.

In the video, you can see Logan appear to slip his wrist through at lease one of the handcuffs bracelets.  He then proceeds to knock on the dividing cage as if to show the police officer he had managed to free himself from the handcuffs.

As Officer Thompson calls over the radio to advise dispatch his suspect had slipped his cuffs in the back, Younger begins aggressively kicking the cage behind the officers head.  You can hear the noise get a bit louder as Officer Thompson appears to be driving faster to get to jail or some other safe area.

Meanwhile, Younger briefly attempts to open the rear doors of the vehicle, but quickly gives up.  He then reaches into his pocket,  pulls out what looks to be a Zippo style lighter and then appears to begin trying to start a fire in the back of the police vehicle.  Almost as soon as he gets a flame lit, windows break as the police car makes a violent bouncing motion.  All of the sudden, you see Younger bounce off camera and out of the vehicle right through where the rear window was seconds earlier.

According to the police crash report obtained by WREG, Younger’s actions forced the officer to drive more aggressively in an effort to get to a place of safety.  As a result, the police cruiser hit a manhole cover at a high rate of speed that caused Officer Thompson to loose control of the vehicle.  After striking the manhole cover, the report says the police cruiser shot back across two lanes of traffic, jumping a concrete curb, sliding sideways through a grassy area where it hit two signs, a telephone box and a chainlink fence.  The force of the impact with the chainlink fence was still great enough to send the police cruiser rolling over on its side, according to the report.

Jonesboro fireman reportedly had to cut Officer Thompson from the damaged vehicle and he was taken by life-flight helicopter to Regional Medical Center.

Amazingly, Younger (the inmate/suspect) fled the scene on foot even after being ejected from the vehicle.

Though, the story ends on a positive note.

Younger was captured after a short manhunt and is reportedly now being held on charges of public intoxication, 3rd degree escape, fleeing on foot, and minor in possession of alcohol.

And in even better news, the Jonesboro Police Department Facebook page put out an update on Officer Thompson, stating he was released from a Memphis hospital on Friday.