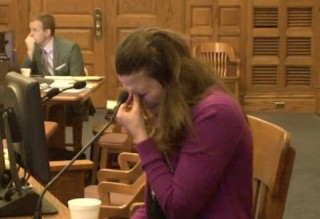 Colleen McKernan testified Monday morning in her trial for the murder of her husband Rob. McKernan described how she and Rob met, and discussed difficulties that they had in the past, including incidents where Rob had been physically abusive. After answering questions about their background, her attorney asked her about New Year’s Eve 2014, the night Colleen shot Rob in their home.

Colleen gave details about their holiday celebration at a friend’s house, which took a turn when they had a dispute over Rob’s suspected drug use. At that point, they got in their car and left, leading to the fatal confrontation that took place when they got home.

Colleen told the court that they had planned on going to a neighbor’s house, but when they pulled up to their home, Rob grabbed her and they went inside. She said Rob shook her and screamed at her, and she was waiting for a moment when she could call the police. But when she finally did take out her phone, Rob grabbed it, saying, “I’ll give you a reason to call the cops.” Colleen then grabbed the gun that was in their bedroom, and when he didn’t back away, she shot him. “He forced me to protect myself,” she testified, “I still loved him.”

Colleen said that she then called 911 and performed CPR. When the police arrived, they handcuffed her and brought her to the station. At that point, she still didn’t know for sure if Rob was dead, and she held out hope that he would survive. “I didn’t want him to die,” she said, “but I didn’t want him to kill me.”

The prosecution is cross-examining McKernan this afternoon. Watch LawNewz‘s live streaming video of the trial here. Stay with us for continuing coverage of the case as it continues.