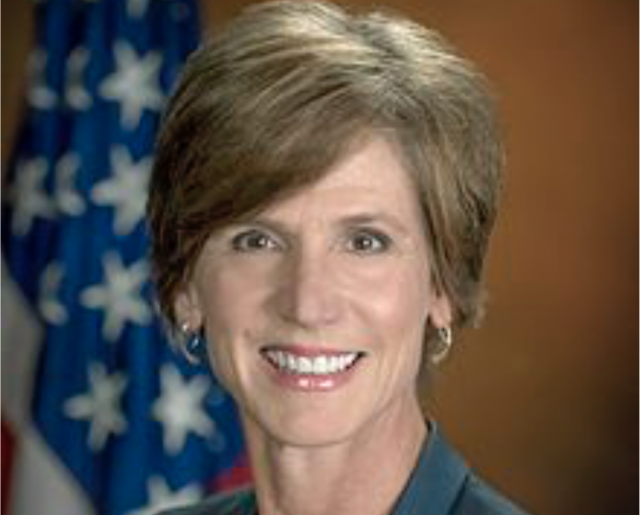 An extraordinary thing happened in Washington D.C. today, the likes of which we haven’t seen since the Nixon administration, if ever.  Sally Yates, the Acting United States Attorney General appointed under President Barack Obama, declared herself judge and jury and announced she would direct Department of Justice lawyers to refuse to defend Donald Trump‘s “extreme vetting” Executive Order. Trump then promptly fired her.

The decision was announced late Monday night and could possibly be the most insane thing to happen in this administration in 10 days chalk full of insanity.

According to a copy of Yates statement obtained by LawNewz, she took this action because she views her responsibility as “ensuring that the positions we take in court remain consistent with this institution’s solemn obligation to always seek justice and stand for what is right.”

“Consequently, for as long as I am the Acting Attorney General, the Department of Justice will not present arguments in defense of the Executive Order, unless and until I become convinced that it is appropriate to do so,” she said.

Despite most people knowing this from an entry level civic course, Yates seemingly thinks she is above the law.  She will also be undoubtedly be cheered by countless political talking heads who also set aside basic civics for politics partisanship for a moment. We are a country of laws and no matter what one thinks of Trump’s Executive Order, bypassing the Constitution to “stop” him is not the way to do it.  It arguably makes you as bad as what you claim to be against.

In fact, even liberal law professor Alan Dershowitz called out Yates for her purely political actions.

“She’s a terrific public servant, but she’s made a serious mistake here,” Dershowitz said.   “But she’s responded to politics with politics. It’s so easy for somebody who is the outgoing acting attorney general to stand up and be a hero against the elected president,” he said.

However, Dershowitz then explained that “this is a very difficult nuanced question.”  While some of the Executive Order may in fact be unconstitutional, he explained that some of it may also “be constitutional, as it applies to people who haven’t ever been in the country and are trying to visit (emphasis added).”

Rather than going out and acting like a political hack, Dershowitz said “she could have done a much, much better job if she had responded to the very, very badly crafted . . .  Executive Order (I fundamentally disagreed with) . . . and  “she would have had a bigger impact.”

Instead, Dershowitz thought “she played into the hands of Donald Trump” by playing his game, essentially.

He also said President Trump is entitled to have a “nuanced, calibrated lawyer to defend his actions in court” and if Yates will not do it, “the courts will probably appoint somebody else to do it.”

Or Trump could fire her, which he quickly did.

Regardless of all this talk, once Sessions is sworn in, Steve Vladeck of the University of Texas Law School explained, “we will very much see the Trump Justice Department led by Jeff Sessions defend this executive order pretty vigorously. And then it will be up to the courts.”

Stephen Miller, a White House policy director, also criticized Yates Monday, telling the network it is “a further demonstration of how politicized our legal system has become.”

He also defended the Executive Order’s legality, saying the Immigration and Nationality Act allows the president ” to exclude any class of would-be visitors or immigrants to our country based on our national security interests.” Hold on to your seat folks.