Why the ‘Affluenza Teen’ Will Be Locked Up For Awhile 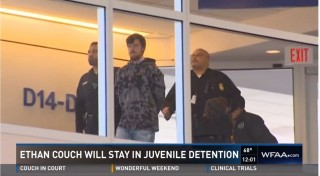 Ethan Couch, the Texas teen who received a huge break when a judge sentenced him to 10 years’ probation for killing four and injuring several others in a drunk driving incident in 2013, faces a number of hearings. Of course, had he been sentenced originally to 20 years incarceration as requested by the Tarrant County District Attorney, he wouldn’t have been able to flee to Mexico and violate probation. Couch is now costing Tarrant County more time and money to lock him up once and for all.

Here’s an explanation of the hearings that will keep him locked up for the time being:

Couch’s detention hearing was held the day after he returned to the U.S. from Mexico. The purpose of the hearing was to determine if he should continue to be held pending the next hearing in a juvenile or adult facility, or be released to a parent or guardian.

Judge Timothy Menikos ordered that Couch be held in juvenile detention at least until his next hearing on February 19, 2016.

Couch’s February 19 hearing is called a transfer hearing. The purpose of this hearing is to officially transfer Couch’s case from family to adult court. Once the case is in adult court, any future violations of the probationary conditions can result in state prison time. The potential sentence is up to 10 years for each of the four victims he killed in 2013 while drunk driving.

The age of majority in Texas is 18 but family court can retain jurisdiction over a juvenile’s case until the age of 19. Couch turns 19 on April 11, 2016. The transfer hearing must be held before then.

The violation of probation (VOP) hearing has not yet been scheduled in Couch’s case. A VOP hearing determines if there are sufficient grounds to find that the probationer violated one or more terms of probation. Among the conditions of Couch’s 10-year probationary sentence was that he not consume alcohol and that he not leave Tarrant County, Texas without permission.

Last December, a video went viral that showed Couch at what appeared to be a beer pong party. While it’s not possible now to determine through blood tests whether Couch consumed alcohol, others who attended the party could offer their observations. Their testimony could be enough to violate him since the burden of proof is much lower than at trial. Rather than the higher trial standard of proof beyond a reasonable doubt, a lower burden of preponderance of the evidence is all that’s needed.

Even if there’s insufficient evidence that he was drinking alcohol, it appears that Couch failed at least one other condition—leaving Tarrant County without permission.

If Couch is found to have violated one or more conditions of probation, he can be held for up to 120 days. Since the violation occurred during the time that family court had jurisdiction over his case, the sentence is determined according to family court law. The court is likely to give him credit for the time he served at least since his return to the U.S. on January 28 but perhaps even since his arrest and detention in Mexico last December. The District Attorney, however, says Couch will not get credit for the month he was detained in Mexico.