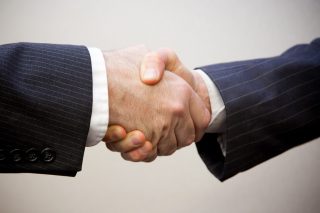 Here at LawNewz, we cover all sorts of lawsuits. Some have very serious consequences, and others so absurd and frivolous, they are just flat out amusing. But this one might take the cake. A Florida lawyer is suing another Florida lawyer over a firm handshake.

Now, this was no ordinary firm handshake, it was allegedly a negligent handshake, so firm that it caused poor George H. Vallario, 76, severe pain for years. The scene of the crime happened at a kid’s birthday party at a Boca Raton home in 2014.  And now the case is going to trial!

“This is a case about an alleged negligent handshake,” says a statement obtained by the Sun-Sentinel  that will be read by Judge Gregory Keyser to the jurors in the planned three-day trial. Yes, three days!  Murder trials have been over in fewer days than that. Why the length?

Well, the plaintiff’s doctors will be testifying, along with birthday party witnesses, and, of course, the jury will see lots of pictures.  According to the Sun-Sentinel, Peter Lindley,60, admits to the handshake but “denies the pressing of the flesh caused any injuries to Vallario.”

Vallario, however, recalls that he screamed “holy cow,” and he even told the newspaper he would let this all go if Lindley had just apologized.

But, instead he is now seeking $100,000 in damages to pay for his pain, and the case is scheduled to go to trial shortly. LawNewz will be sure to keep tabs on this one, and report back!