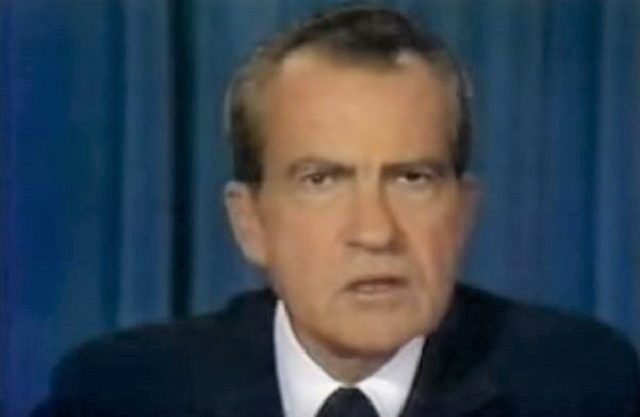 Since 1973, we’ve had Richard Nixon as the go-to example for presidential transgression. Well, now that we’ve made America great again, Tricky Dick has relinquished that monopoly to his orange heir to the throne of misconduct. Still, though, the shadow of Nixon looms large. Yesterday, when President Donald Trump fired FBI Director James Comey, the cries rang out:

“This is nothing less than Nixonian.”

“Not since Watergate have our legal systems been so threatened and our faith in the independence and integrity of those systems so shaken.”

If we’re going to make the comparison, though, we should really get it right. Nixon and Trump aren’t about to become the next Lincoln/Kennedy list of weird coincidences. The two have some commonalities – but Trump is so much worse that he makes Nixon look like Roosevelt.

Truth: Nixon never fired his FBI director. And Nixon’s people are less than amused by the suggestion that he did.

What Nixon did do was direct Attorney General Elliot Richardson to fire Archibald Cox; Cox had been the special prosecutor charged with looking into the burglary at Watergate. Richardson refused to fire Cox, knowing that such a move would have been career suicide, because Richardson had promised the Congressional Oversight Committee not to interfere with the Watergate investigation. To underscore his point that firing Cox was inappropriate, Richardson resigned as attorney general. Nixon then directed Deputy Attorney General William Ruckelshaus to fire Cox; Ruckelshaus had the same problem – he’d also promised Congress not to interfere – so he also refused to axe Cox and resigned in protest. Nixon’s gaze finally landed on Solicitor General Robert Bork (yes, that Robert Bork who President Reagan nominated to the Supreme Court and was rejected by Congress); Bork had made no promises to Congress, and carried out Nixon’s orders immediately after being sworn in as Acting Attorney General.

Clearly, Nixon’s order to fire Cox was the mother of all ass-covers; still, though, it wasn’t quite the same as firing an FBI director (nor is it remotely similar to dropping a bombshell firing on the entire FBI without so much as an email beforehand). A special prosecutor is, by definition, special. Like Kenneth Starr in his crusade against Bill Clinton, Archibald Cox operated as an individual, and not as a representative of a major American institution. That distinction does – and should—make a difference.

Nixon’s attempt to neutralize Cox’s investigation into Watergate was undeniably inappropriate, but was far more precise in its method. Simply put, Cox had one job – to get to the bottom of Watergate. James Comey, on the other hand, takes up much more space in the landscape of the American government. As FBI director, his duties went far beyond supervising the Trump-Russia connections. Firing Comey, although legal, appears to be a major abuse of the President’s authority.  Suddenly disrupting the nation’s top law-enforcement agency for seemingly personal reasons, and blaming it on Hillary Clinton‘s emails is miles beyond Cox’s firing.

You know the political scandal is bad when Nixon’s ppl are offended by the reference #notNixonian #FBIDirector https://t.co/PFGsB6sjBf

By the way, not even Nixon tried this. #NotNixonian #TrumpRussia https://t.co/vYzDksMP5P

Nixon was corrupt and competent. @realDonaldTrump is only one of these things (it isn’t competent…)#notnixonian

Those who have actually studied Nixon’s history understand that there was far more to his presidency than the Watergate scandal. While he certainly had his share of wrongheaded conservative ideas and more than a mild tendency toward cronyism, Nixon did not attempt to transform the role of the presidency itself. Nixon operated within the confines of the government he lead, and did not expect unfettered support from the rest of the federal government.  So yeah, that’s different.

Oh, and a little pre-emptive rebuttal: Trump’s firing of Comey is also not like Bill Clinton’s firing of his FBI director, William Sessions. While Clinton was a favorite target of Republicans at the time, there was no indication whatsoever that his firing Sessions had any goal or effect of suppressing any investigation. Sessions was fired for mishandling federal money, and doing things like using the FBI plane to visit his daughter. Those who point to Clinton’s firing of Sessions as a defense for the appropriateness of Trump’s firing of Comey illustrate precisely the damage Trump has already done to our country; people are now so used to POTUS acting illegally that when he does something legal, they’re not alarmed even if it’s totally inappropriate and wildly self-serving.

Getting our presidential history accurate is more important now than ever before. With a President whose behavior is both unprecedented and unpresidential at every opportunity, it’s critical to know what’s truly alarming and what is merely hyperbole.  Firing Comey gets filed under “alarming.”