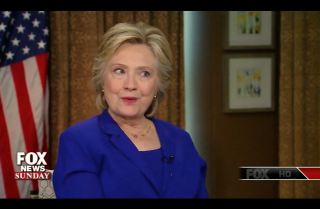 Friday afternoon just as everybody was getting ready to leave for the long holiday weekend, why of course, the FBI decided to release the damning files from their Hillary Clinton investigation!  Sorry, journalists, no afternoon drinking for you! Instead, the next few hours will be spent poring through pages and pages of documents including Clinton’s 12-page 302 interview form. Despite the overall inconvenience/bitterness from us journalists, today’s document dump ensures that pretty much no one from the public will focus their attention on what the FBI found–including revelations about how Clinton apparently doesn’t remembering going through training regarding the handling of classified information or — how she didn’t know that “C” meant classified. By Tuesday, all of that will be old news.

This isn’t the first time that the FBI’s timing as it relates to the Clinton investigation has drawn scrutiny. You might recall reporters scrambling as Clinton went to FBI headquarters July 4th weekend for her interview. Many pundits were not too pleased that they allowed her such a convenience.

And then just as everybody was getting over their holiday weekend hangovers, on July 5th, FBI Director James Comey notified the public that he would not be recommending charges against Clinton for her use of a private email server.

Those timing decisions were all certainly questionable, but defensible on the FBI’s part. But from an optics perspective, what the FBI did today was just total B.S. The Agency made a very poor choice to release the documents on a Friday afternoon, the day before Labor Day weekend. I say FBI because I assume it was ultimately their decision. Comey has made it very clear from the beginning that he is calling the shots about this. However, you can’t rule out the possibility that someone, um, a little higher up intervened. Conservatives are already doubting the integrity of the investigation. This only adds more fuel to their never-dying theories. Just take a look at Twitter, which is already exploding over this issue:

FBI releases documents from their HIllary “investigation.”
REALLY?! ANOTHER FRIDAY AFTERNOON DOCUMENT DUMP ON A… https://t.co/lKiv8DyNBZ

The @FBI just released a bunch of Hillary stuff. So, it’s the Friday before Labor Day, no one cares, and by Tuesday it’s “old news.” Perfect

Sure, I certainly understand that the documents had to be redacted to protect sensitive/classified information which no doubt slowed their release. But even so, why not release them on Tuesday?

Many continue to believe Clinton was given special treatment. I have no idea if that’s true. I trust Comey, and think he probably did a thorough job. Based on what I’ve read of the case, it doesn’t appear Clinton’s actions violated U.S. laws. However, the FBI’s choice to release these documents on a holiday weekend will only work to confirm the beliefs, and reinforce what Donald Trump has been saying all along that “the system is rigged.”