The Voice Singer Christina Grimmie Shot and Killed After Concert 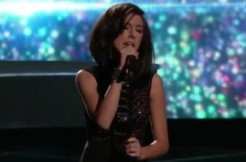 On Friday night, singer Christina Grimmie was shot and killed after a concert in Orlando, Florida. The 22-year-old became famous as a contestant on NBC’s The Voice, mentored by musician Adam Levine.

OPD was told suspect walked toward Christina and shot her. Christina’s brother immediately tackled the suspect, who shot & killed himself.

Chief John Mina of the Orlando Police Department held a press conference Saturday morning. He said the suspect (still unnamed) was a 27-year-old white male armed with two handguns, and a hunting knife. He repeated the original announcement that Grimmie’s brother tackled the suspect, who shortly after committed suicide.

Detectives are looking at his phone and computer and hope to identify a motive. His name will be released later pic.twitter.com/FF7lNiNxY6