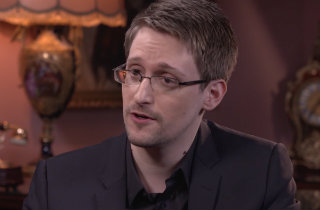 It’s hard for some to imagine that in just over two weeks President Barack Obama will be just another living former president.  In these next weeks, we may see a record number of commutations of federal prison sentences and perhaps even some controversial pardons.  Some are talking about a preemptive pardon for Hillary Clinton, but most of the noise surrounds the fate of former NSA contractor, turned leaker —Edward Snowden.

American presidents have the power under Article II, Section 2 of the United States Constitution to “grant reprieves and pardons for offenses against the United States, except in cases of impeachment (emphasis added).

This power will no doubt leave Obama with some difficult choices in the coming days, especially with various groups pressuring him to use the pardon power in all sorts of novel ways.  Yet, the decision on whether to pardon Snowden should cause Obama to lose no sleep at all. The answer to that question is easy: Snowden does not deserve consideration for a presidential pardon. In fact, the idea that it might even be considered should be insulting to most Americans.

An excerpt published Thursday in Newsweek of a new book due out this week called How America Lost Its Secrets: Snowden, the Man and the Theft, written by author Edward Jay Epstein, provides a great basis for why such a pardon should never even be on the table.  The book provides mountains of new information about Snowden that Epstein says he gathered during his three years working on the project.  As he notes, most of what the public knows about Snowden came from Snowden himself — or from friendly journalists and a Hollywood movie directed by Oliver Stone.  Through his investigation, however, Epstein says he discovered the “Snowden” version told by Snowden is not exactly what happened.

This should not come as a surprise to those who have been skeptical of Snowden from day one.

For example, it is obvious to skeptics that Snowden is not really a whistleblower.  He’s a straight up leaker and when comes down to it might be as bad as Robert Hanssen of the FBI or Aldrich Ames from the CIA.  It’s true that both of those men were convicted of actually spying for the Russians and Soviets and there is currently no allegation that Snowden is working as a Russian agent in such a traditional manner.  However, we now live in a world where information can be stolen in quantities that were unfathomable in the days of Ames and Hanssen.  Stolen information can be quickly posted to websites that allow anyone in the world to view the stolen information — including our enemies.

In other words, traditional spying as we knew it during the Cold War is essentially no longer.  Briefcase dead drops are now a thing of the movie especially when one person can take a thumb drive and steal more information than previous spies and leakers combined.  What’s more, the leaker doesn’t need to have any contact with a foreign agent. They can simply contact a willing journalist who will publish the stolen data for the world to see, and the practice is generally considered protected by the First Amendment — so long as the journalist did not play a role in the theft.

Where Epstein’s book proves incredibly valuable is that it supports long held beliefs of  “Snowden Skeptics” by providing previously unknown details or little reported facts about the case. Most of these details come from damage assessments of the thefts done by government officials and bipartisan congressional reports.

He also explains how Snowden was never “trapped” in Russia by the U.S. State Department. Instead, his passport was simply invalidated to travel anywhere but the United States after the Department of Justice filed a formal complaint charging the then-30-year-old with theft and violation of the espionage laws.  Snowden apparently chose to basically get stuck in Russia. The book reveals that Snowden’s passport was actually canceled before he fled Hong Kong and he could have only boarded that plane to Moscow with the help the Russian government.  Putin later admitted as much during a televised press conference, but it is still unclear whether Snowden knew the extent of the Russian intervention, according to Epstein.

Furthermore, the book confirms that Snowden didn’t just steal information about “domestic spying” operations. The truth is Snowden apparently stole many more files related to what most in the intelligence community and beyond see as legitimate, overseas spy operations — including anti-terror operations and those targeted against the U.S. by our enemies. He reportedly focused his theft on the most sensitive “Level 3” data that includes lists of sources and methods in China, Russia and Iran.

This is the type of information that “could invalidate America’s entire intelligence enterprise if it were placed in the hands of an adversary,” Esptein writes.  He suggests Snowden would have known Booz-Allen Hamilton in Hawaii (his last contractor position) was one of the few contractor facilities that had the authority to hold “Level 3” data and former co-workers believe he took the lesser paying gig to “get access to lists of machines all over the world the NSA had hacked.”

Perhaps most importantly, the book highlights how most of the programs Snowden exposed “authorized by the president and Congress, and approved by 15 federal judges” before they go active.

All in all, we may never full now the extent of the damage Snowden did to out national security and perhaps that is why Epstein writes:

“After three years of investigating this case, I must refute this depiction of Snowden, and any version of these events that paints him the hero.”

The book reaffirms my opinion that Snowden violated numerous national security laws, and the damaged he did to our country is vastly outweighed by any positive effects he may have had (which Epstein cites), and that is why the man NEVER deserves to be pardoned.