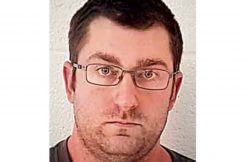 Timothy Blake, 26, was charged on Dec. 30 with two felony counts of pandering obscenity, misdemeanor sexual imposition, and misdemeanor menacing by stalking. Which is just a polite way of saying he allegedly sprayed his actual semen on women by using a syringe.

Police said they learned about it on Nov. 2, according to an affidavit obtained by The Smoking Gun. A woman shopping at a Walmart in Marietta, Ohio said she saw a “creepy” man hanging around her before he threw some “sticky” liquid on her lower back and foot. Cops heard about a similar incident on December 28. Both times, surveillance footage caught the suspect leaving in a pickup truck. And well, police said they found it on Dec. 30. That’s when they questioned Blake, and at first, he allegedly claimed he was just spraying egg yolk on the women.

Black allegedly admitted to doing this sort of thing a dozen times at the same Walmart.

“The defendant stated on about four or those occasions he had squirted semen on women and the other time he had used egg yolks and flour or spit,” the affidavit reads. Blake allegedly said that he thought the woman in the Nov. 2 incident “displayed exhibitionist characteristics and wanted to be noticed.”