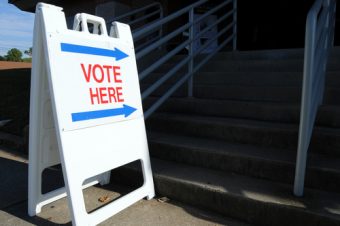 After a ridiculous move by the Sixth Circuit, the Ohio Democratic Party has now gone to the Supreme Court to restore some sanity in tomorrow’s election. Voter intimidation is on the line, and Elena Kagan may be Ohio’s last hope.

Here’s the backstory. On November 4, the U.S. District Court for the Northern District of Ohio issued a temporary restraining order (“TRO”) against the Trump Campaign and enjoining it from intimidating, harassing, or coercing voters. The underlying lawsuit was based on the mountains of inappropriate activity coming out of Camp Trump. From the candidate’s own statements urging Ohio supporters to swarm the polls and “watch,” to the campaign’s constant rhetoric that the election is “rigged,” to the web signups for “Trump Election Observers,” there’s plenty on which the plaintiff had to base its lawsuit. Plus, counsel for the Ohio Republican Party reported to the court that it had no evidence of voter fraud recently, or even in the last five years.

At the TRO phase, the case should (and did) advance like any other; the Dems requested an immediate court order based on the lawsuit’s likely success in the long run and the risk of irreparable harm absent a court order. District Judge Gwin examined the evidence and pleadings, took testimony from live witnesses, and granted the TRO. It was probably a fun moment in the courtroom when the Trump Campaign’s own lawyer was asked as an “officer of the court,” (the litigation version of “answer this question, and no bullshitting please), if fraud could determine a presidential election, and he conceded that such a result was “less likely.”

Granting a TRO doesn’t, of course, dictate an overall winner in the lawsuit; but it does set the tone for the short-run. And based on the evidence presented and the claims made, it seems to me that Judge Gwin didn’t exactly need Solomonesque wisdom to see that the TRO was the right call. The judge laid out the logic he employed in his order with this comment from the bench:

“If you had a chance to go to the Indians game and somebody [c]ame to you and said it’s already been fixed, the umpires have already decided to give it to Chicago, is it more likely that you’re going to go to the game or less likely? . . . I would think it’s less likely. . . . And I don’t think it’s plausible to say more likely.”

Judge Gwin’s order prohibited the Trump Campaign from engaging in a number of behaviors, including poll-watching, harassment of voters, interference with polling locations, loitering, and handing out campaign literature in buffer zones. Most of those actions are already illegal, but a TRO is always a nice way to underscore the definition of proper behavior.

But then, in a move that really can only amount to bad jurisprudence and partisan politics, the Sixth Circuit reversed Judge Gwin’s order without giving the matter much consideration. Here’s how the procedure played out: the District Court issued a TRO prohibiting the Trump people from intimidating and harassing voters. Then, the defendant Trump Campaign filed an immediate request for a stay of that TRO with the Sixth Circuit. Normally, the next step in this dance would be for the plaintiff to file its brief in opposition to the stay, and the appellate court would consider both briefs before making its decision. And that’s where the Sixth Circuit went haywire: it reversed the District Court’s TRO without even hearing from the Ohio Democrats.

In its review of the District Court’s ruling, the Sixth Circuit was faced with the question of whether the lower court abused its discretion in granting the TRO. It’s not about whether the Sixth Circuit itself would simply have decided differently – but rather, about whether Judge Gwin followed the law. In making such an inquiry, the Sixth Circuit would, logically, have had to review the entire record from the lower court’s TRO proceeding; it would have needed to get a handle on what evidence Judge Gwin considered when making his ruling, and have evaluated whether such a ruling made legal sense. But that’s not what the Sixth Circuit did. Instead, it lifted the TRO without even looking at the transcripts from the District Court – a move that the Ohio Democrats would later call an “extraordinary departure from the most basic requirements of appellate procedure…with no basis in law.” I tend to agree. What’s weirder is that the District Court’s TRO basically just ordered the Trump people to follow the election laws that are already on the books in Ohio—a reality that makes Trump’s entire position on this TRO both inconsequential and utterly despicable.

That brings us to the Supreme Court. In a final attempt to protect the electoral process, the Ohio Democrats filed an application with Justice Kagan. She will likely refer it to the full Court, asking for Judge Gwin’s TRO to be reinstated. In that application, the Ohio Democrats pointed out the lunacy what happened below:

“the Sixth Circuit somehow found that the District Court had abused its discretion before it had even received the transcript of the evidentiary hearing, at which live witnesses presented testimony that informed the District Court’s decision.”

And it went on to call attention to the part that is even more troubling – that a presidential campaign is fighting against a court order that simply requires compliance with existing law:

“Crucially, that decision was stayed even though it required compliance with specific, clear, and unchallenged provisions of Ohio election law.”

The Ohio Democrats also took the opportunity to remind SCOTUS that this isn’t simply a partisan issue. The Ohio Republicans have also weighed in on the matter:

“If left in place, the Court of Appeals’ stay will, in the words of the Republican Director of the Cuyahoga County Board of Elections, put the “safety and well-being” of Ohio voters at risk from Trump-encouraged and unauthorized “watchdogs” at the polls.”

We’ll post updates as we hear whether SCOTUS decides to get involved on this one.

This is an opinion piece. The opinions expressed here are just those of the author.