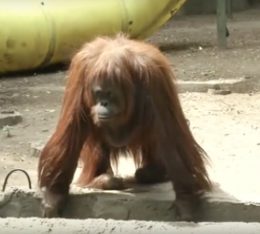 In 2014, an Argentine court handed down a ruling that found an orangutan held in captivity at a zoo in Buenos Aires was entitled to certain legal rights as a “non-human person.”  Now, as we come up on nearly two-years since the court handed down this landmark ruling, a new report indicates things have not improved much for Sandra the orangutan.  She reportedly remains locked in a cage at the now-closed Palermo Zoo as the debate continues about what to do with her.

The Daily Mail provides more on Sandra’s back story in a recent article that explains how back in 2014 a local animal rights group filed a habeas corpus writ on Sandra’s behalf, arguing “a great ape has rights, including freedom and avoiding suffering from being in captivity.”  A judge agreed, finding Sandra is “legally not an animal but a ‘non-human person,’” according to the report.

Earlier this year, another court found Sandra is a “sentient being” and ordered the Palermo Zoo to improve her living conditions.  For most of her life, Sandra has reportedly lived in “a basketball court-sized concrete space with iron bars that resemble those in a prison.

Unfortunately, the Palermo Zoo subsequently closed and is in the process of being converted to eco-park.  Sandra reportedly remains locked in her cage as experts are still trying to determine the best move going forward.

One of the experts explained why Sandra’s case was so important.

“Ultimately, it is a question of our humanity how we treat Sandra. We know that orangutans are intelligent beings who care for their children and can learn about the world in which they live,” Shawn Thompson, a member of the expert panel told the Daily Mail.

Since she was born in captivity, experts do no believe Sandra can be released into the wild.  They have also reportedly expressed concern about releasing her in a sanctuary with other orangutans because she is “classed genetically as a hybrid orangutan — half Sumatran, half Bornean….”  As a result, Sandra “might not be able to adapt if sent to Indonesia, where most of the world’s wild orangutans live and there are a number of sanctuaries.”

Some people involved in the case are reportedly coming to grips with the realization that it might be in Sandra’s best interest to essentially remain in her cage, so long as it receives some major improvements and increases in size.

“At this point, I think Sandra will stay here, but if there’s a possibility that her conditions can improve somewhere else we will, of course, encourage a transfer,” Rosario Espina, director of biodiversity at the Buenos Aires eco-park said.