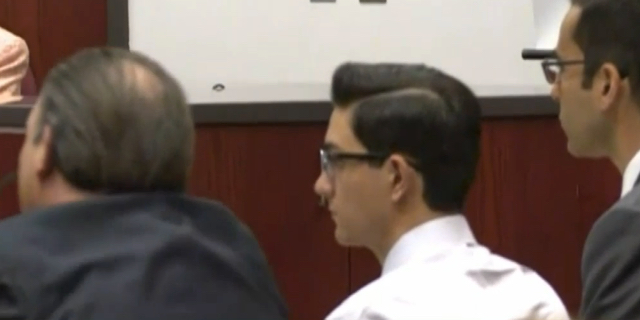 Steven Jones was an “assassin emerging from the darkness” when he shot four fellow students at Northern Arizona University on October 9, 2015. That’s according to Ammon Barker, the prosecutor who led the state’s opening statement in the case Wednesday afternoon.

Jones faces one count of first-degree murder and six counts of aggravated assault over the shooting.

One of the victims, Colin Brough, died in the attack. The three others who were shot were wounded.

Barker said the events unfolded as Jones and other friends were walking down the street in the early morning hours. One friend knocked on a fraternity door as a joke.

A group of students attending a party at the fraternity answered the door and angrily spilled out onto the streets, prosecutors said. What started as a verbal argument resulted in a sucker-punch to the defendant’s face.

Here, prosecutors said, is where it all went wrong. The defendant went to his car, at least 90 feet away by some accounts or 150 feet away by others, retrieved a gun, and then went back to the site of the disagreement.

He was “armed for battle,” prosecutor Barker alleged. “He was the most deadly person in sight.”

Jones pulled the trigger, shooting and killing Colin Brough. When someone asked him why, he said, “I don’t know,” the prosecutor alleged.

Jones then alleged shot victim Kyle Zientek twice in the back.

The shots subsided. Then the defendant shot two others students about ten to twenty second later, court documents indicate. The second burst of shots came after others in the crowd started hitting or punching Jones in an attempt to seize his gun.

After police arrived, prosecutor Barker says the defendant told officers that no one “did anything wrong but me.”

Barker promised to call thirty-five witnesses in the trial. He promised that all three surviving victims will testify.

“This case it not a ‘whodunit,” Barker told the jury. He said that the question for them was to ascertain the defendant’s intent in pulling the trigger.

Defense attorney Joshua Davidson gave a starkly different version of the events, immediately taking exception to the prosecutor’s “assassin in the dark” theory.

According to the defense, Jones, whose acquaintance had knocked on the fraternity door, was attacked when the crowd spilled out onto the street. He had “seconds” to determine how to defend himself, Davidson told the jury.

Jones was clean. He didn’t have a “drop” of drugs or alcohol in his system. By contrast, the surviving victims had blood alcohol levels of .181 (twice the legal limit), .092, and .208 (two and a half times the legal limit). The victim who died, Colin Brough, had a blood alcohol level of .285. Brough also had marijuana and Xanax in his system, the defense attorney explained.

These men were part of a crowd that started spewing expletive-laden threats at Jones. He was “sucker-punched out of the clear blue sky” so hard that his glasses fell off his face, defense attorney Davidson said. Jones needed the glasses to see.

Jones thought the crowd was chasing him, but couldn’t see clearly, the defense went on to say.

Davidson explained that Jones then retrieved his gun. He originally pointed it low to the ground in a “low ready” position. It was not pointed at anyone. Jones announced that he had a gun. He fired at Brough, who later died, when Brough “lunged” at him.

Jones “offered aid” to Brough after shooting him. He was “cooperative and peaceful” when police came, Davidson stated.

Davidson said that the events that unfolded do not amount to murder because there was “no premeditation – just a young man doing what he had to do to defend himself.”

Davidson said that the jury will be instructed about the law of justification and self defense. The burden of proof forces the state to prove its case beyond a reasonable doubt and over the defense of justification.

The defense pointed out that there will be disagreements over the events. The various witnesses saw things differently and at different times. The witnesses had “different perspectives,” both “visually” and “psychologically.” Some of the witnesses gave prior inconsistent statements. Some of the physical evidence won’t line up with the testimony, the defense stated.

The judge will not allow into evidence statements that Jones thought he was going to die. Those statements are “self-serving,” the judge ruled, and reminded attorneys of that decision before the jury heard the opening statements.