President Trump is Legally Barred from Appointing His Family Members 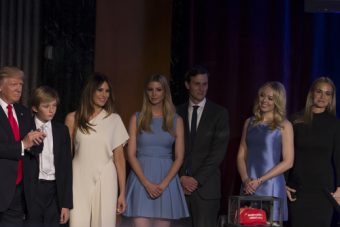 Over the last few days, there has been a lot talk about whether Donald Trump will name his sons, daughters, or son-in-law Jared Kushner to a top position in the White House. Last week, Trump did tap Jared, Ivanka, Donald Jr. and Eric to be part of the transition team. But what about the White House? CBS News’ Lesley Stahl stoked the speculation when she asked whether “any of you want a job in your father’s administration?”

Only problem? Trump is actually legally barred from appointing family members to an official position. That’s all because of a federal law passed in 1967.

The law is pretty clear:

Kushner, who is married to Ivanka Trump, would also be barred, as the law specifically defines that “son-in-law” is a relative. Despite this statute, the mainstream media continues to hype up speculation that one of the Trump family members could be appointed.  The law was originally passed after President Kennedy appointed his younger brother to attorney general.

Eric Trump was specifically asked about whether he would take a position in the White House on ’60 Minutes’:

Eric Trump: So we have an amazing company. You know, one of, I think, the fortunate things for my father and our father is that he was able to step out of the company to run for commander-in-chief. And I think he’s going to rely on us more than ever. And–

Interestingly, there may be a loophole around all of this. The law says that penalty for violating this law is that the person is “not entitled to pay.” So theoretically, if the Trump children were willing to give up a salary, they might be able to get by. On Sunday night’s ’60 Minutes,’ Trump told Lesley Stahl that he would not take a salary as president.

So, what could happen if Trump did it anyway?

“While it’s true that the penalty for violation of the statute is just to withhold salary or other financial remuneration from the wrongfully appointed employee, there’s also the possibility that any action taken by such a wrongfully appointed employee could be subject to legal challenge and potentially even be voidable,” Steve Vladeck, professor of law at the University of Texas School of Law told CNN.