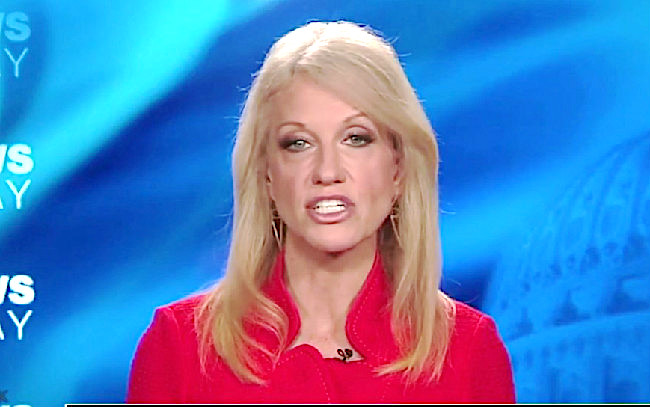 As we reported earlier, Kellyanne Conway may have made a big mistake by appearing on television earlier Thursday morning and hawking Ivanka Trump‘s product in front of a national audience. “Go buy Ivanka’s stuff,” Conway said. “I’m gonna give it a free commercial here. Go buy it today, everybody. You can find it online.” But, you see, there is a federal law that actually pretty explicitly prevents this.

The regulation, 5 CFR 2635.702, says: “An employee shall not use his public office for his own private gain, for the endorsement of any product, service or enterprise, or for the private gain of friends, relatives, or persons with whom the employee is affiliated in a nongovernmental capacity.”

Legal experts from across the country are weighing in saying this endorsement was a clear violation.

So what will happen to Conway? The answer is probably not much of anything. The law is pretty vague when it comes to penalties, and ultimately leaves it up to the President to do anything to her.

“The issue is whether the White House will even acknowledge that this is wrong, this shouldn’t have been done,” Larry Noble from the Campaign Legal Center told LawNewz.com.  “I don’t expect to see (a punishment) but I can always hope.”

Typically, Noble says an employee may face a warning, suspension, or even firing for this kind of ethics violation.

“This is an unusual situation, because of who is involved in it,” Noble said.  “This isn’t being done inadvertently. They are doing this purposely. The way she did it was very much in your face.”

So, as far as penalties, the law states:

A violation of this part or of supplemental agency regulations may be cause for appropriate corrective or disciplinary action to be taken under applicable Governmentwide regulations or agency procedures. Such action may be in addition to any action or penalty prescribed by law.

As you can see it’s pretty nonspecific. So who would even initiate the investigation against Conway? Well, according to the law, “It is the responsibility of the employing agency to initiate appropriate disciplinary or corrective action.” Since Kellyanne Conway is counsel to the President, it would be up to Trump to initiate an investigation.

However, there is a caveat.

Next, OGE will probably generate a letter or report, and may even find that Conway violated the law. But, OGE has no enforcement or investigative authority.  So ultimately the President has a lot of discretion on whether to take any action. As OGE noted in a series of tweets, other agencies do have the power to investigate:

1/OGE’s website, phone system and email system are receiving an extraordinary volume of contacts from citizens about recent events.

2/OGE works to prevent ethics violations. OGE does not have investigative or enforcement authority.

3/Congress, GAO, the FBI, Inspectors General, and the Office of Special Counsel have the authority to conduct investigations.

4/ When OGE learns of possible ethics violations, OGE contacts the agency, provides guidance & asks them to notify OGE of any action taken.

In typical cases, a multi-day suspension might be issued against the employee. But, this case is far from typical. And considering that just yesterday, President Donald Trump semi-endorsed Ivanka’s products on his own Twitter account by blasting Nordstrom’s for dropping her line, it is unlikely Trump would jump at an opportunity to punish Conway.

We’ve reached out to additional experts on this issue, and will update accordingly.

Editor’s Note: This piece has been updated with tweets from the Office of Government Ethics.