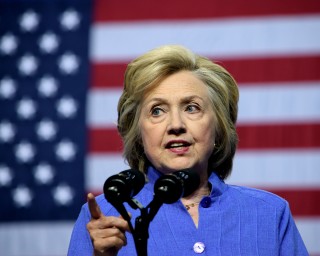 No matter which political party people favor, one thing is clear: everyone is so ready for this election to end. Judging from the headlines out there, it seems like plenty of folks are abandoning any hope of electing President Trump, and instead, moving on to plan for another impeachment of another President Clinton.

Let’s just get something straight about impeachment, right from the start: it has a specific purpose. That purpose is to remedy official wrongdoing, not to turn over an election to Congress.  I spoke with University of North Carolina Law Professor Michael Gerhardt, the leading expert on impeachment, whose expertise was relied upon by the House of Representatives during the impeachment of President Bill Clinton. He was was clear: “impeachment is not supposed to be an opportunity to re-litigate an election.”

Under Article II, Section 4 of the U.S. Constitution, impeachment is permitted, although not quite defined:

“The President, Vice President and all civil Officers of the United States, shall be removed from Office on Impeachment for, and Conviction of, Treason, Bribery, or other High crimes and Misdemeanors.”

The Constitution sets out impeachment as an enumerated power of the legislature, in which the House may bring formal charges against a federal official much the same that a prosecutor may bring an indictment against an ordinary citizen.  Although the word “impeach” is often misused colloquially, it really just means that a person was charged with wrongdoing.  The impeachment next moves to the Senate, which acts as the trier of fact, and ultimately decides whether to convict the federal official on the charges asserted. Although the outcome of an impeachment proceeding is described in the same terms that a criminal trial would be, the two are not the same.  If convicted on an impeachment, a federal official is automatically removed from office (and may be barred from holding future office as well); there is no part of the impeachment process that is analogous to sentencing in a criminal trial. Following an impeachment case, the federal official may be subject to criminal prosecution; if that prosecution proceeds, the President may pardon the person convicted.  However, no pardon is available for an official convicted after impeachment, because pardons only relate to criminal convictions.

But — here is the big question. Would it even be legally possible to impeach Clinton after she were elected? It’s not totally clear either way, but there is a real chance that impeachment wouldn’t even be available as a tool to boot a President Hillary Clinton from office.

Impeachment is a remedy meant to address misconduct of an official while that official is in office. While there are a great many things to say about Emailgate, the fact that we’re saying them now unequivocally demonstrates that whatever misconduct occurred did so prior to Clinton’s presidency. There’s no statute that definitively lays out the founding fathers’ rules regarding impeachment timelines, and it’s not an issue that has come up enough times for a clear rule to have developed; the closest thing we have is a statement from the House Judiciary Committee from 1873.

At the time, the House was considering impeachment of Vice President Schuyler Colfax for having taken part in some shady railroad dealings. The Committee said that under the Constitution, impeachment “should only be applied to high crimes and misdemeanors committed while in office and which alone affect the officer in discharge of his duties as such, whatever may have been their effect upon him as a man, for impeachment touches the office only and qualifications for the office, and not the man himself.” So, at least at that time, impeachment was understood as a sort of employment remedy, done by public officials to public officials when they’ve committed professional wrongdoing.

However, there is a tiny little precedent for the concept of impeaching someone for wrongdoing that preceded the person’s federal service – and it’s much more recent than 1873. Meaning Republicans might be in luck. That case involved the 2010 impeachment and conviction of District Court for the Eastern District of Louisiana Judge Thomas Porteous. Judge Porteous was removed from the bench after Congress concluded that he had been involved in corruption, committed perjury, accepted bribes from lawyers practicing in his court, and attempted to conceal his sordid past during the confirmation process. During those impeachment proceedings, the timing of Porteous’ wrongdoing never surfaced as any true obstacle.

There’s certainly an argument to be made that if the timing of Judge Porteous’ crimes didn’t thwart his impeachment, then the timing of President Clinton’s shouldn’t prevent hers.   However, from a procedural standpoint, a Clinton/Porteous comparison doesn’t quite work. Clearly, Judge Porteous’ misconduct related directly to his service on the bench, and presented an ongoing problem. His confirmation process itself was also tainted by his having committed fraud. By contrast, Secretary Clinton’s mishandling of classified information is far more separable from what would become her presidency. It took place during a time period completely removed from her administration, does not directly involve her presidency, and has been a highly public news story for her entire presidential campaign. However serious one may feel about Clinton’s email practices, there is no rational basis for a position that the scandal is, with respect to timing, similar to Porteous’ fraud.

Timing isn’t the only speed bump on the road to a second Clinton impeachment. There’s also the possibility that impeachment proceedings could not (or should not) proceed, because an election itself gives rise to legal consequences. In our democracy, elections are meant to be sacred events in which American citizens speak as a group. Given the amount of media coverage devoted to the email scandal, there’s a logical inference to be made that a Clinton victory is the electorate’s way of waiving any right to punish Hillary for known wrongdoing. Voters on every portion of the political spectrum are aware of Hillary Clinton and her emails. The topic was brought up at every possible opportunity. There’s not a voter out there saying, “emails? What emails?”  Accordingly, the election itself could be deemed a collective ratification of Secretary Clinton’s behavior with regard to confidential data.

So wait, someone commits a crime, and then because that person manages to get elected, she is absolved from accountability? I admit that at first blush, that doesn’t sound quite right. But it’s important to remember that the impeachment process is not a criminal prosecution. Impeachment is a hybrid political/legal tool that is quasi-criminal in basis, and highly political in practice.   For starters, a constitutional basis for impeachment is the commission of “high crimes and misdemeanors” – but no clear definition exists for what that even means.  Alexander Hamilton’s Federalist No. 65 described impeachable offenses as those that “proceed from the misconduct of public men … from the abuse or violation of some public trust” – but that’s not really much help.

Impeachment is not a court proceeding from which an accused may appeal, and is not conducted by the judiciary branch. It does not result from the secret convening of a grand jury, or culminate in closed-door deliberations. Instead, Congress becomes the prosecutor, judge, and jury, as it holds open hearings for both the impeachment and the conviction process. Such a system inextricably ties Senators’ votes at the conviction phase to that Senator’s political livelihood. If constituents believe their representatives voted inappropriately during a presidential impeachment proceeding, they can vote those representatives out at the next opportunity.   In such a context, the presidential election would have to to matter.

“for one thing, there is a tendency to treat elections, at least sometimes, as ratifying some arguable misconduct or at least signaling that the “misconduct” in question was not disqualifying, since, after all, the official was elected to office and the public was aware of the arguable “misconduct” at the time of the election.”

Whether the election as proof of ratification would halt an entire impeachment proceeding outright, or would affect it in some lesser way remains to be seen. As much as impeachment is a political process, it’s also one that transcends politics. Impeachment requires the Senate to sit in place of a court and effect justice. I’d like to think that our Senate could at least be called on to exercise the same kind of impartiality and fair-mindedness that we ask everyday jurors to exercise in courtroom. That obligation means that a Senator could not (or at least should not) vote to convict a president simply because the two are political opponents.

Procedural questions about whether impeachment is an appropriate tool to use against Hilary Clinton, or about how such an impeachment would proceed are important and complex. It doesn’t help that there’s not even a clear answer to the question, “who answers these questions?” Professor Gerhard’s take on the lack of clear arbiter was:

While Hillary-hating members of the House may be drafting their Articles of Impeachment now, their efforts are probably a bit premature. Even if Congress ultimately deems impeachment the correct course of action to pursue against Hillary Clinton, it must proceed with caution. Without clear statutory guidance, future Congresses will certainly look to an impeachment of the next President Clinton as precedent.  We must, in turn, demand that our Congress approaches any impeachment with responsible standards for our government, instead of with the knee-jerk immaturity of political expediency.

In the land of so much uncertainty, this one is pretty clear.

Article II, Section 1 of the United States Constitution provides that:

“In case of the removal of the President from office, or of his death, resignation, or inability to discharge the powers and duties of the said office, the same shall devolve on the Vice President … until the disability be removed, or a President elected.”

Should Hillary Clinton be removed from office via impeachment and conviction, her Vice President would take over for the remainder of the term.