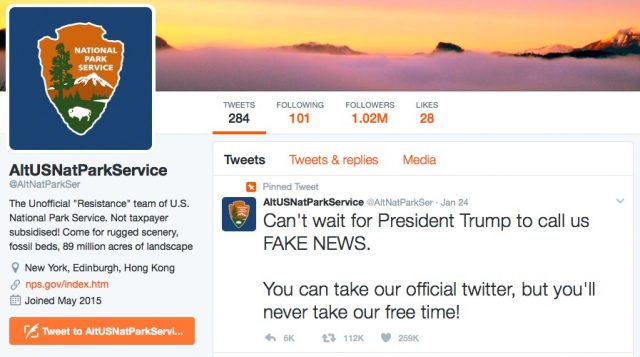 So it seems like the idea of “Alternative Facts” is beginning to come full-circle. Yesterday, after President Trump apparently muzzled employees of science-based federal agencies from talking to the media, the following “rogue” Twitter handles popped up @RogueNASA, @AltNatParkSer, and @ActualEPAFacts.  Each account claims to be run by active or former employees of their respective real agencies, and they’re gaining followers by the second. As of this writing, @AltEPAFacts has 71K followers, @RogueNASA has 339K, @AltNatParkSer has 1.01M. Just for reference, that’s up from 690,000 followers as of 10:35pm last night – kind of a “yuge” jump in twelve hours.

Clearly, these “rogue” accounts are going to ruffle a few feathers.  Someone is bound to accuse the account owners of doing something illegal, especially as the incredible popularity continues to build.  As it turns out though, these science guys are pretty smart– even about the law.

First, they made sure that they weren’t violating the Hatch Act. You remember the Hatch Act, right? That’s the federal statute James Comey may have violated by giving bizarre press conferences about Hillary Clinton and her email servers. It prohibits federal employees from influencing politics.  The @RogueNASA people made sure to clarify that their handle was not owned by a federal employee. Problem solved.

To prevent Hatch Act violations, ownership of this account has been given to two people who are not employees of the federal government.

Next, these new Tweeters needed to be sure they complied with Twitters’ Terms of Service, or risk being thrown off what’s amounting to a very successful platform. Looks like they did their research there too.

Under Twitter’s rules, to be a “parody” account, there are two requirements:

I think it’s fair to say that the thousands of people following @RogueNASA, @AltNatParkSer, and @ActualEPAFacts know that the handles aren’t the “official” accounts of the respective government agencies. That’s pretty much the entire point. And if the surrounding context, including incessant media coverage of President Trump’s gag order on scientists, doesn’t make it clear why Twitter followers are flocking to these “alt” accounts at rates more than double than they’re following the actual federal agencies, then the information itself Tweeted out eliminates any question.

Also, please go follow real NASA accounts. Their staff is still tweeting the truth about science. If something changes, we’ll let you know.

Can’t wait for President Trump to call us FAKE NEWS.

You can take our official twitter, but you’ll never take our free time!

Twitter itself is highly unlikely to get involved in any dispute over these “alt” handles, as the company generally has a history of staying out of similar disputes.

Lastly, the alt-Tweeters need to be sure they don’t run afoul of trademark laws for using the official NASA, EPA, and NPS logos. Based on well-established principles of “fair use,” “parody,” and “satire,” I think they’re safe there too. The primary purpose of prohibiting trademark infringement is to ban someone from confusing an intended audience with a copied mark. Under the Lanham Act, a derivative logo would be problematic if it “is likely to cause confusion, or to cause mistake, or to deceive” with regard to the original trademark.

People aren’t flocking to these “Alt” accounts because they all simultaneously became interested in what leading American scientists are doing these days, and think those Twitter accounts represent the official agencies; they are responding to a specific ban on information from the actual government agencies.  The official agency social media accounts are no longer entirely credible — not because of any trademark infringement — but because our chief executive quashed their communications.

James Weinberger, a trademark and copyright litigator at New York’s Fross Zelnick Lehrman & Zissu, provided LawNewz.com with the following explanation of how the fair use defense would likely protect these alt-Tweeters:

“There are two types of fair use that relate to trademarks: descriptive and nominative.  For descriptive fair use, you are permitted to use another’s mark to describe your goods/services if the use is accurate and other than as a mark.  So for example, you can say that a Twitter account is operated by “anonymous employees of the National Park Service.”  Nominative fair use allows you to use a mark to refer to the owner, but only (1) so long as the owner cannot be referred to by other means, (2) you only use as much of the mark as is needed to identify the owner and (3) use of the mark does not suggest sponsorship or endorsement of the trademark owner.  This would permit the employees from using some indicia of the NPS, but it’s not clear that it would extend to use of a logo.”

Trump and his directives aside, however, American law favors free speech.

Given a hefty enough legal budget, I’m sure someone will argue that these Twitter accounts cause “tarnishment” or “blurring” of the trademarked logos; but these arguments would perhaps be the most ridiculous of all. Such claims would require someone to prove, for example, that NASA’s actual reputation was harmed when an unofficial source reported the actual research NASA is actually doing. That’s sort of like arguing that a person has been defamed when someone refuses to lie about them. That “alternative” logic may work for KellyAnne Conway, but I don’t think it’s going to fly in federal court.