FACT CHECK: Actually Mr. Trump, It Would Be Perfectly Legal to Deny You the Nomination 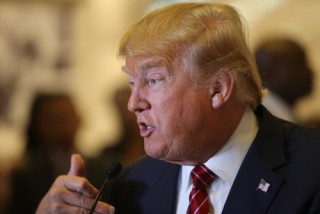 As rumors swirl that there are several hundred anti-Trump GOP delegates organizing a movement at the convention, Donald Trump is doing what he does best: fighting back.  And, as usual, it doesn’t appear anyone is really fact checking what he actually says. Here’s what Trump said that got my attention over the weekend.

“So I hear they want to try to do something at the convention, wouldn’t it be funny if Trump gets record setting votes, the biggest in history, has unbelievable number of states and somebody who was beat like a drum … says our nominee is … ,” Mr. Trump said (yes, he referred to himself in the third person.) “First of all, it’s not legal, you can’t do it. Second of all, the Republican National Committee is with me.”

So all right on point #2, he might be correct, the RNC might be with him  — at least for now. However, point # 1 is just flat out wrong. It is legal, and delegates could do it. It would be perfectly within the bounds of the law to deprive Trump of the nomination at the Republican National Convention in July. In fact, Mr. Trump should know that it is ultimately the delegates who decide who is nominated. They make the rules. So, if they pick somebody else … guess, what? That’s who gets the nomination. That’s who faces Hillary Clinton in the general election. And, if the reports are accurate, a fight could be coming.

Former Ted Cruz supporter Steve Lonegan, who is leading an anti-Trump grassroots movement, told Politico that “Every hour I’m getting contacted from people around the country. It’s pretty remarkable.” In addition,  a group called “Free the Delegates” is gaining momentum to “save the party.” Back in March, we wrote about this very thing happening –‘How the GOP Could Steal the Nomination From Trump Even If He Wins 1,237.’ Trump now has more than 1,500 delegates, and all of his challengers have dropped out of the race. But the same legal principles apply.

“There are many ways to undo a first ballot, even if you have the magic number assuming the Trump delegates are not really loyal. They may start out to be loyal and change their minds,” Elaine Kamarck, a senior fellow at the Brookings Institute told LawNewz.com at the time. Karmack is also the author of “Primary Politics.”

Here’s how it usually works. Delegates are bound by either state party rules or law to vote for the candidate who they are assigned to based on the primary or caucus in that state. However, they are usually only bound in the first round of balloting.  After that, it varies by state, but delegates are eventually freed up to change their vote. For example in Massachusetts, Trump won 22 delegates.  Those delegates are bound to vote Trump in the first round of balloting only. If there is no change of rules, Trump clearly wins.

However, the delegates can literally unbind themselves before they even cast their first ballot. The Convention Rules Committee could recommend a rule change. They would ultimately have to send the new rules to the floor of the convention for a vote by all of the delegates. If the delegates vote to change the rules so as to ‘unbind’ themselves during the convention, then they could vote for whoever they wanted even in that first round. And, guess who is now in charge of the RNC Convention rules committee? Ex-Congresswoman Enid Mickelson who is reportedly an ally of the Bush family and Mitt Romney. And, in fact, she is quoted in March  saying existing nomination rules — including those that bind delegates as a result of their state primaries and caucuses — can all be changed. On top of that, she’s apparently not a huge fan of Mr. Trump.

“Neither Hillary Clinton nor Donald Trump are going to be people that we point our children toward and say, ‘I want you to be just like them when you grow up,'” she recently said.

“The delegates ultimately have the final say in the rules that will govern the convention. That may mean that they opt to unbind themselves, but a majority of them would have to agree to that,” Josh Putnam, an expert in this matter, and lecturer at the University of Georgia, told LawNewz.com.

Now you might say, wait a minute — there are many states that require by law for delegates to vote a certain way in the first round of balloting. For example, in Arizona, the law binds all 58 delegates to the winner of the March 22, 2016 primary election. How could the delegates just throw that all away at the convention? Well, because state law can basically be overruled by new national convention rules, according to most legal experts.

“Political parties operate like private clubs. This stuff isn’t law, it is a matter of state party and national rules and regulations,” Gregory Magarian, an elections law professor at Washington University at St. Louis told LawNewz.com in March. Simply put, the state rules/laws are not enforceable. In Cousins v. Wigoda, the U.S. Supreme Court ruled that parties are protected under the First Amendment right of association. Meaning, political parties are voluntary organizations so they can make their own rules.
The court held:

The States themselves have no constitutionally mandated role in the great task of the selection of Presidential and Vice-Presidential candidates. If the qualifications and eligibility of delegates to National Political Party Conventions were left to state law, “each of the fifty states could establish the qualifications of its delegates to the various party conventions without regard to party policy, an obviously intolerable result.” Such a regime could seriously undercut or indeed destroy the effectiveness of the National Party Convention as a concerted enterprise engaged in the vital process of choosing Presidential and Vice-Presidential candidates— a process which usually involves coalitions cutting across state lines.

Bottom line: If the delegates vote to give, say, a Mitt Romney or Paul Ryan the nomination, there is little Mr. Trump could do about it. Sure, he could try to file suit in the individual states that have laws on the books regarding who a delegate must vote for. But most legal experts agree he wouldn’t get very far. The Supreme Court makes it pretty clear that the National Party has the right to pick who they want — regardless of who won the popular vote in the primaries or caucuses.

“Even electors can stray under the electoral college, which is a crime under some state laws. No such prosecution would be upheld,” Kenneth Gross, a DC-based elections law attorney at Skadden, Arps told LawNewz.com in March.

So, while Mr. Trump may contend that depriving him of the nomination is illegal, apparently few legal experts do.  And GOP Convention Chair Paul Ryan even implied he realized such in an interview on Meet The Press over the weekend.

“It’s not my job to tell delegates what to do, what not to do or weigh in … They write the rules, they make the decisions … all I want to do is make sure it is done above board, clearly honestly and by the rules,” Ryan said.