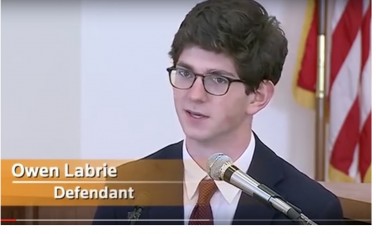 The prestigious East Coast prep-school where Owen Labrie was convicted of sexually assaulting a freshman student is now at the center of a civil lawsuit filed on behalf of the victim.  The lawsuit was filed in June and alleges St. Paul’s School failed to adequately protect the victim. As a part of the civil lawsuit, the victim’s attorneys sought leave to file the case under the pseudonym “J.D.” in an effort to protect the identity of the victim and her family.  In its response filed last week, St. Paul’s School says it will agree to the case proceeding under a pseudonym, for now, but only if the court imposes certain restrictions to essentially keep plaintiffs’ counsel from trying the case in the media.  Notably, the school wants to use the victim’s full name in open court, if the case goes to trial.

“The School recognizes J.D. has an interest in protecting her identity,” the school wrote in the new court filing. “However, Plaintiffs’ desire to minimize personal exposure associated with the lawsuit is substantially undermined by the tactics of commencing a national media campaign to prejudice the School and this proceeding while simultaneously seeking court-sanctioned anonymity.”

The school accuses plaintiffs’ counsel of filing the lawsuit late in the afternoon, just before the court would close for the day, while also sending copies of the complaint to various news outlets in an effort to frame the coverage in their favor.

“The School and its counsel were almost immediately inundated with requests from the media to comment on a complaint that they did not have and that, due to the timing of its filing, would not be a matter of public record until the next day,” the court filing states.

The school contends the tactics of plaintiffs’ counsel will almost certainly influence any potential jurors, writing, “Plaintiffs are transparently waging a battle in the court of public opinion as to the parties’ character, credibility and reputations for a reason—to advantage their claim and potentially influence the jury without any concern for either the rights of the defendant or the appearance of a fair process.”

The court filing also states this is not the first time plaintiffs’ counsel has engaged in similar pretrial tactics.

“It is hard to justify this approach since Plaintiffs’ counsel, Silverman Thompson Slutkin & White, LLC (the “Silverman Law Firm”) was strongly admonished by the United States District Court for the District of Columbia less than two years ago for engaging in a similar media campaign upon filing a sexual assault complaint on behalf of a pseudonymous plaintiff.”

In light of these concerns, St. Paul’s School requests the judge enter an order prohibiting plaintiffs’ counsel or any other surrogates from making public statements about the matter while litigation is pending.  Additionally, they also seek permission to use the victim’s name during the discovery process, although her name and other personally identifiable will be redacted from public court documents.  Finally, they ask that the victim’s name can be used in open court should the matter proceed to trial.

According to the Boston Globe, plaintiffs’ counsel declined to comment on the filing, saying he would file his formal response with the court.

St. Paul’s School Partial Objection to Motion for Leave to Proceed Under Pseudonyms