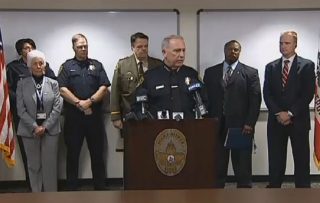 Police in Santa Maria, California used an unorthodox method to manipulate gang members. Authorities monitoring the MS-13 gang learned that the group was looking to kill two men, so they planted a press release saying they were arrested and being turned over to immigration. Local media reported the “news,” and were dismayed to learn that they had been conned, even though it saved the men’s lives. While the press and the gang believed that cousins Jose Santos Melendez and Jose Marino Melendez were arrested for identity theft, in reality they were placed into protective custody.

Detectives decided that issuing the fake news release was the best option to save the men without letting the MS-13 gang know that they were being watched. When hit men showed up to kill the Melendezes, the cousins were gone. The next day, police overheard a conversation among gang members that referenced the news report.

Over the next three weeks, police were able to get enough evidence to arrest 17 gang members on 10 murder charges, plus plots for eight other killings, including the Melendez cousins.

Local NBC affiliate KSBY, which unsuspectingly reported the fake news as fact, said in a statement, “While we strongly support the police department’s efforts to protect citizens in harm’s way, we are concerned this type of deception can erode the basic trust of our residents and viewers.”

Santa Maria Police Chief Ralph Martin told KSBY news director Kendra Martinez that he believed the tactic was justified, and he would do it again in a similar situation.