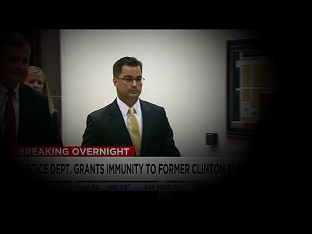 Judicial Watch’s attorney could barely utter her first question when a lawyer for Clinton’s IT aide objected.

“Outside of the scope,” Mark MacDougall said.

A transcript released Thursday of testimony by former Clinton IT Bryan Pagliano aide reveals that he invoked his Fifth Amendment right not to incriminate himself more than 128 times. The just-released transcript also reveals it got pretty tense between attorneys in that deposition room.  Pagliano was being deposed as part of a lawsuit filed by the conservative watchdog group, Judicial Watch, seeking information related to Clinton’s private email server. He is widely believed to have been the person who set-up and maintained former Secretary of State Clinton’s server at her New York Home.

Here is an example of what happened during Wednesday’s deposition which lasted about 1 1/2 hours:

A: Witness is instructed not to answer. That question is outside the scope.

Q. Okay. When did you begin — starting working for the State Department, Mr. Pagliano?

A: On advise of counsel, I will decline to answer your question in reliance on my rights under the Fifth Amendment to the United States Constitution. .

By page 15 of the 95 transcript, not one substantial question had even been asked. Romona Cotca, an attorney for Judicial Watch was seeking information like who paid Pagliano to set up the server, who else was involved and how many different email systems were associated with the clinton email server.

“In setting up the server and the Clintonemail.com system, what discussions did you have with Secretary Clinton as to how the system should be set up and why?” she asked at one point.  Things got a little heated about mid-way through the deposition.

During one exchange, Judicial Watch’s attorney said:  “To raise a Fifth Amendment privilege, there must be reasonable basis for it and it must be appropriate, not just for purposes of obstructing this deposition.”

“You’ve been on notice for many weeks that Mr. Pagliano was going to assert his Fifth Amendment rights. He’s doing that. That is his constitutional right. And you have no — you have no authority or no right to lecture him about it,” Mr. MacDougall, Pagliano’s attorney, replied. He added that Judicial Watch is not entitled to discovery on matters related to the ongoing FBI investigation.

Earlier this month, Federal Judge Emmet G. Sullivan postponed Pagliano’s deposition and ordered that he reveal details of his immunity agreement with the federal government. That agreement was filed under seal.