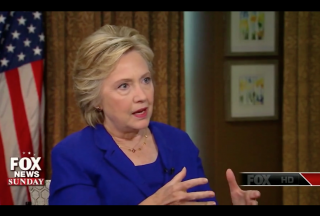 A federal judge has ruled on Judicial Watch’s request to depose Hillay Clinton as part of their FOIA lawsuit. Judicial Watch is trying to determine Clinton’s motivation for setting up a private email server and also determine if she violated any Freedom of Information Act laws. Late Friday afternoon, Judge Emmet Sullivan ruled that Judicial Watch will not be allowed to take Hillary Clinton’s deposition. However, he did permit them to serve what are called called “interrogatories” on her. These are basically question sheets that Clinton is required to answer truthfully.

“Judicial Watch has failed to demonstrate that it cannot obtain the discovery it seeks through other, less burdensome or intrusive means such as interrogatories,” Judge Sullivan wrote in his order

However, the judge did say Secretary Clinton has not answered yet why she set up the private server.

He wrote in the order:

Because Secretary Clinton has not answered for the record and under oath questions relevant to the limited scope of discovery authorized in this case — the purpose for “the creation and operation of the clintonemail.com system for State Department business” — and because her closest aides at the State Department do not have personal knowledge of her purpose for using the system, the Court will permit testimony from Secretary Clinton consistent with the limited stope of discovery.

Interestingly, news came out today that Clinton told FBI officials that former Secretary of State Colin Powell advised her to use personal email. Emmet added that he would allow Judicial Watch to file follow-up questions if she doesn’t answer the questions to their satisfaction.

“Judicial Watch is a right-wing organization that has been attacking the Clintons since the 1990s. This is just another lawsuit intended to try to hurt Hillary Clinton’s campaign, and so we are glad that the judge has accepted our offer to answer these questions in writing rather than grant Judicial Watch’s request,” Clinton spokesman Brian Fallon told Politico.

“We are pleased that this federal court ordered Hillary Clinton to provide written answers under oath to some key questions about her email scandal,” Judicial Watch President Tom Fitton said in statement. “We will move quickly to get these answers. The decision is a reminder that Hillary Clinton is not above the law.”

This story has been updated with Judicial Watch’s statement.