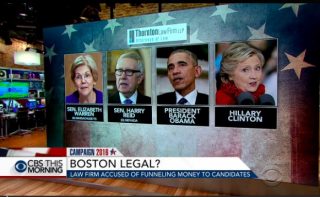 OpenSecrets.org is a nonpartisan nonprofit organization which tracks money in U.S. politics

Federal prosecutors in Boston have opened a grand jury investigation into potentially illegal campaign contributions from lawyers at the Thornton Law Firm, a leading donor to Democrats around the country, according to two people familiar with the probe.

The U.S. Attorney’s office is one of three agencies now looking into the Boston-based personal injury firm’s practice of reimbursing its partners for millions of dollars in political donations, according to the two people. The law firm has insisted that the donations were legal, but, soon after the Globe and the Center for Responsive Politics revealed the firm’s practice, politicians began returning hundreds of thousands of dollars in donations.

Federal prosecutors as well as state and federal campaign finance regulators are investigating whether Thornton and its lawyers violated the law by paying “bonuses” to firm partners in the exact amount of their political donations and often on the same day, the people familiar with the investigations said. The firm’s attorney acknowledges the payments went on for a decade.

Repaying donors for their contributions is generally illegal because it conceals the true source of the donations. The lawyers would be considered “straws donors” — or front men — for the firm itself, allowing the firm to vastly exceed campaign donation limits.

Brian Kelly, a former federal prosecutor who is representing Thornton Law, would not comment on “the existence of any investigations,” but said in a statement that the firm “intends to cooperate fully if asked about its donation program and it is confident the firm complied with all applicable laws and regulations.

“Thornton’s fundraising program was vetted by an outside law firm ten years ago and was overseen by an outside accountant,” wrote Kelly, a partner at Nixon Peabody. He said the reimbursements came out of each lawyer’s own equity — or ownership — in the firm.

If the grand jury indicts the firm and its lawyers, Thornton could be the biggest so-called “straw donor” case ever brought nationwide. Between 2010 and 2014 alone, lawyers for the firm, which specializes in asbestos cases, donated $3.4 million to candidates and the Democratic Party, especially to Senate candidates who opposed overhauling the asbestos litigation system.

“There are serious penalties for these violations,” said Brett Kappel, a campaign finance lawyer in Washington, D.C. “Here you potentially have multiple violations of the prohibition on contributions in the name of another, each one of which would be separately charged.”

Violations involving straw donations of $25,000 or more could bring a sentence of five years in prison, for each count, Kappel said.

Two years ago, the former CEO of the Fiesta Bowl, John Junker, and four others pleaded guilty to a “straw donor” scheme in which employees were reimbursed more than $45,000 for political contributions they were encouraged to make. Junker served four months in federal prison and four months in a halfway house.

The largest civil penalties ever levied by the FEC for “straw donations” came in the late 1990s when Audiovox Corp. and a number of individuals were fined $849,000 for a series of contributions as small as a few hundred dollars. However, companies have sometimes paid millions in penalties to settle criminal charges.

The reported grand jury investigation comes just two weeks after the Globe and the Center for Responsive Politics documented that three partners at the firm — founder Michael Thornton, former House assistant majority leader Garrett Bradley and David Strouss — received about $1.4 million in bonuses to offset their campaign contributions over a five-year period. In at least 30 cases, Thornton was also reimbursed for donations made by his wife, Amy, based on a review of internal payroll records obtained by the Globe and the Center.

The firm started offering bonuses to offset partners’ political donations at a time when the partners were being asked to donate more and more money, causing some grumbling. The reimbursement policy was so complicated that some lawyers at the firm said they didn’t understand it, but they were still happy to get their money back.

Since the Globe story ran, at least 19 candidates and one campaign committee announced that they have returned more than $900,000 to lawyers at the firm, or gave the money to the U.S. Treasury or a charity. They include Hillary Clinton, Sens. Edward Markey and Elizabeth Warren (D-Mass.), Rep. Joseph Kennedy III (D-Mass.) and Boston Mayor Martin J. Walsh.

State Attorney General Maura Healey, who called for investigations of the firm, also returned donations she received from Thornton lawyers.

One of the biggest recipients of Thornton’s largesse, the Democratic Senatorial Campaign Committee, told the Globe and the Center on Tuesday night that it, too, was giving up contributions from partners at the firm. Previously, committee officials had indicated they were awaiting a review of the donations by its attorneys, but a person at the committee said the organization has sent $267,000 to Treasury. However, records show that contributions from Thornton employees to the DSCC over the last 10 years total $1.5 million.

In addition, the specialists said, Thornton lawyers who participated in the contribution reimbursement system could be charged with conspiracy.

A campaign finance watchdog group filed a complaint against Thornton with the Federal Election Commission on Nov. 2, a step that automatically triggers an FEC review. Now that the US Attorney is involved, however, prosecutors could ask the FEC to hold off on any investigation, and the agency could pick it up again after the criminal case is over and then seek to impose civil penalties, according to Dan Petalas, a former acting general counsel of the FEC who is now in private practice in Washington.

The Massachusetts Office of Campaign and Political Finance is also looking into whether the law firm was the “true source” of the more than $260,000 in donations to state and local politicians lawyers at Thornton Law firm have made, according to two people briefed on the matter. If the regulators find wrongdoing, they can impose penalties, called civil forfeitures, or refer the matter to the state Attorney General for possible criminal prosecution.

This case has the potential to be the largest “straw donor” investigation in state history.

The biggest civil forfeiture in recent years was $185,000 paid last month by Canton businessman, Vincent Barletta, who provided $35,500 to employees to make political contributions. In 2015, the owners of Capitol Waste of East Boston, a trash company with contracts with Boston and other communities, agreed to pay $120,000 to the state and four cities after OCPF found the owners gave employees $38,000 to donate to political candidates.

This was part of a joint investigation written by The Boston Globe’s Andrea Estes and Viveca Novak for OpenSecrets.org, and reprinted with permission by LawNewz.com. The original version of the story appeared here. OpenSecrets.org is a nonpartisan nonprofit organization which tracks money in U.S. politics