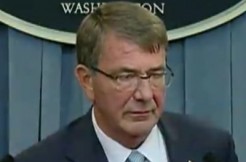 On Thursday, The Department of Defense announced they’ll lift the ban on transgender people openly serving in the U.S. armed services.

“They want to be held to the same standards, and treated like everybody else,” Secretary of Defense Ash Carter said at a press conference. Implementing the policy will take about a year.

On July 13, 2015, Carter announced a six-month study that’d analyze the “policy and readiness implications” of letting transgender people serve in the military.
–