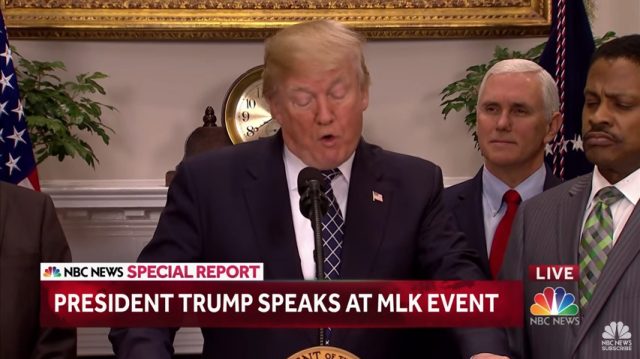 One of Donald Trump‘s most notorious former attorneys sued Martin Luther King Jr. for libel in 1965.

Roy Cohn was the lead attorney in a defamation lawsuit filed against King and others by a New York City cop who shot and killed a black teenager–allegedly in cold blood. A capsule summary of the incident leading up to the lawsuit can be found in The New York Times‘ archives. Under the headline, “NEGRO LEADERS SPLIT OVER CALL TO CURTAIL DRIVE,” the article from July 31, 1964 by R.W. Apple Jr. reads, in part:

Dr. King de­nounced Police Commissioner Michael J. Murphy as a man “utterly unresponsive to either the demands or the aspirations of the Negro people,” but did not call for his resignation.

“He is intransigent and has little understanding of the ur­gency of the situation,” the Negro leader added. “If he had, he would have suspended Lieu­tenant [Thomas R.] Gilligan at once, and would not have obstructed establishment of a public review board to investi­gate charges of police bru­tality.”

It was Lieutenant Gilligan’s shooting of James Powell, a 15­‐year‐old Negro schoolboy, that touched off the rioting here this month. Negro leaders have de­manded that the police officer be suspended from the force or indicted for murder, Lieutenant Gilligan has said he fired in self‐defense as the youth threatened him with a knife.

The lawsuit came to be known as Gilligan v. King. Filed well before white moderates and liberals found much to revere in the Civil Rights Movement, the lawsuit targeted Martin Luther King Jr. as well as activists and organizers William Epton and James Farmer.

Bill Epton chaired the Harlem branch of the Progressive Labor Party (“PLP”). Epton’s PLP disseminated hundreds of posters reading, “Wanted for Murder,” and “Gilligan the Cop,” with an image of Gilligan in uniform between each phrase–the poster itself was produced by the Harlem Defense Counsel. Farmer was the national director of the Con­gress of Racial Equality (“CORE”). In an official release intended to counter the Manhattan District Attorney’s exculpatory report on Gilligan’s killing of Powell, CORE noted, “Policemen should not shoot boys half their size.”

Powell’s death was highly publicized and fed into a week’s worth of rioting over New York City’s racist treatment of African-Americans. Gilligan sued. A summary produced by the court reads, in relevant part:

The complaint alleges plaintiff enjoyed an outstanding and excellent reputation and good character, that defendants since in or about July, 1964, conspired and maliciously and willfully participated in a plan and course of action designed to defame and injure the plaintiff in his good name and reputation, in his profession as a policeman; to destroy his income and livelihood and to remove plaintiff as a police officer of the New York City Police Department; that on or about July 18, 1964, the defendant Harlem Defense Council published, and upon information and belief the other defendants participated in, the preparation and publication of a false, scandalous, derogatory, infamous, malicious and libelous article, poster or handbill, of and concerning plaintiff.

The lawsuit was filed largely on the basis of the “Wanted” poster but also alleged that King and Farmer somehow took part in a conspiracy to tarnish Gilligan’s name. A motion to dismiss the suit was denied in 1965. And, after years of legal wrangling, Gilligan was given the go-ahead to proceed with a jury trial in 1968 on the merits of the claim itself, but in line with the hard-to-prove “actual malice” standard elucidated in New York Times Co. v. Sullivan.

After that go-ahead, however, it appears Gilligan settled out of court–or dropped the case entirely due to the near-impossibility of proving the “actual malice” standard–because there are no further public records of the case’s progression.

Roy Cohn died, disbarred and disgraced, in 1986–after years of service to a controversial New York City real estate magnate. Donald Trump once described Cohn thusly, “All I can tell you is he’s been vicious to others in his protection of me. He’s a genius. He’s a lousy lawyer, but he’s a genius.”