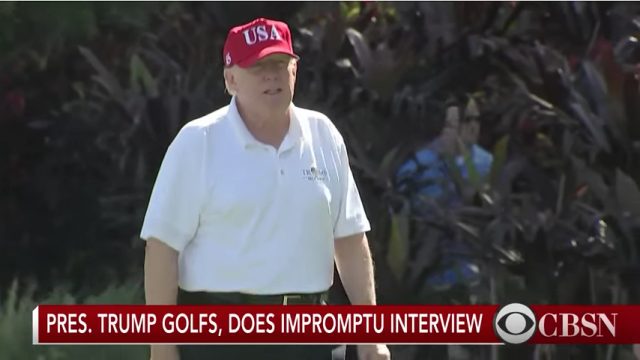 Reports on presidential golf expenses are not itemized under official U.S. government statistics or written into the outlays for the U.S. governmental financial year. Rather, the $43 million total is a low-end estimate provided by TrumpGolfCount.com. (A similar tracker took note of President Barack Obama‘s similarly publicized proclivity for the track.)

In sum, President Trump made a confirmed 88 visits to various golf courses in 2017. Some caution, however, as a confirmed visit to a golf club doesn’t necessarily equate to a confirmed game of golf. That list is available in full here.

To break down the numbers a bit, taxpayers shelled out just shy of $20 million for airfare on Trump’s golf outings to Mar-a-Lago alone. An additional $8.5 million was spent on flights to Trump’s Bedminister club.

The site also features a side-by-side comparison between Presidents Obama and Trump–both maligned by their respective political opposition for spending an inordinate amount of time out on the links.

When the 44th and 45th presidents face-off over the dubious honor, however, Trump beats Obama hands-down. In fact, it’s not even close: After the first year of each man’s presidency, Obama had only played golf 28 times; Trump definitely played at least 43 times in that same timespan–and likely played around 76 games of golf–at a cost of roughly $1 million per game–all on the dime of the American people.