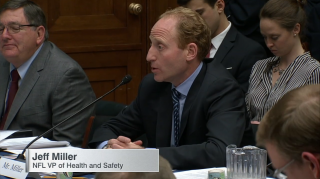 We’ve heard at one point in our lives the old adage “less is more.”  It appears that the NFL did not take that to heart as they have made an admission that will have a long-standing impact.  On Tuesday, during a roundtable discussion before US House of Representatives’ Committee on Energy and Commerce, NFL Senior Vice President for Health and Safety Jeff Miller admitted that there is a link between playing football and developing chronic traumatic encephalopathy, or CTE’s for short.

Jeff Miller’s comments on this link are based on research that Boston University has conducted analyzing the link between playing football, concussions, and the development of this neurodegenerative disease. The NFL responded by agreeing that Jeff Miller’s comments “accurately reflect the view of the NFL.” From a legal perspective, Miller’s comments and the NFL’s agreement of this link will undoubtedly affect any pending and future NFL concussion litigation cases, but could also affect language in the NFL’s collective bargaining agreement as well. The agreement that affords retired players a certain benefit if they are a victim of neuro-cognitive disabilities.

Lastly and most importantly, the NFL’s admission of the link between playing football and developing CTE should carry a ripple effect across other major US sports leagues who are susceptible to similar concussion litigation.

Let’s first discuss the impact of this statement on the pending NFL concussion litigation.  In April 2015, Judge Anita Brody of the Eastern District of Pennsylvania approved a settlement that would award a class of nearly 5,000 plaintiffs at least $900 million for those who were victims of CTE’s and other neurodegenerative diseases rooting from their playing days in the NFL.  In the case summary in Judge Brody’s ruling, the class of plaintiff argued that the NFL acted with reckless disregard and negligently in properly treating players when they received a concussion during play.  Over time, these concussions caused bruising in the brain, which ultimately led to neurological deficiencies like memory loss, depression, and aggression.  Meanwhile, the NFL put on the “League of Denial” hat and asserted the position that players assumed the risk of playing an aggressive sport and developing long-term injuries like they did.  Needless to say a settlement was reached.

However, there are former players who have appealed the settlement offer and have asked the 3rd Circuit Court of Appeals to deny this settlement.  With this latest admission by the NFL, a lawyer representing the class of plaintiffs in this concussion litigations has asked the appellate court to toss this settlement entirely.  Frankly, this is a wise move on the lawyer’s part.  While the appellate process can be painstakingly long, the plaintiffs’ motivation to throw out this settlement is absolutely warranted. For years, the NFL has been deflecting any blame for negligently treating concussed players.  NFL Commissioner Roger Goodell, prior to the NFL concussion litigation becoming a big deal, at one point commented on the death of NFL lineman Justin Strzelczyk.  When it was concluded that he had CTE, Goodell said that there was no link between Strzelczyk’s CTE and playing football and even added that Strzelczyk may have had a concussion from swimming.  The NFL’s “assumption of risk” defense during the concussion litigation was the league’s way of arguing that as much as they could have taken measures to minimize the number of concussions yearly, the players are at as much fault as they know that football is an inherently gritty, violent, and aggressive sport.

The NFL’s denial of CTE and other long-term brain injuries has been extraordinarily disturbing, to say the least.  There’s no question that this latest statement by the NFL will further reinforce the plaintiff’s case and potentially raise the settlement amount past $1 billion if the 3rd Circuit Court of Appeals indeed denies the settlement.  Paul Clement, representing the NFL in the concussion litigation, wrote to the appeals court to state that Jeff Miller’s comments were consistent with the NFL’s position in the case and wouldn’t affect the settlement agreement.  That is to be determined though.  Even if nothing pans out from concussion settlement agreement or appeal, the NFL’s admission of the link between playing football and developing CTE will certainly play a role in future concussion lawsuits against the NFL.

With respect to the NFL’s collective bargaining agreement, multiple articles address the issue of providing financial support to players who are retired but are suffering long-term or permanent disability like dementia, ALS, and other neurological diseases.  For example, Article 58 lists the conditions of the “88 Benefit” which provides medical benefits to former players who suffer ALS, dementia, or Parkinson’s disease. Article 61 additionally lists the terms and conditions of the NFL player’s disability plan, which provided benefits to players who are victims of total and permanent disability.  Article 65 of the CBA affords players who develop certain permanent neuro-cognitive impairments after retirement the right to collect benefits.  However, to be eligible for these benefits, the players must be under the age of 55, vested under the league’s retirement plan, have at least one credited season after 1994, and executed a release of claims and covenants not to sue the league. As you can see, all these articles addressing long-term disability benefits can create some confusion.

The current NFL CBA is set to expire in 2020.  If I were the NFLPA, I would insist on consolidating all these articles into one master article, which would create a disability plan that would afford all players the opportunity to seek medical benefits for any form of a neuro-cognitive disease that they develop, whether they start developing it at age 30 or age 85. I would also demand that higher financial benefits are awarded to retired players to cover any medical costs that are excessive.  If the NFL is taking the position that CTE is linked to playing football, surely the least the league can do is give retirees some more money to help handle the cost of any long-term neurological treatment they’re receiving.  Where this could get tricky is if a retired NFL player has already sued the league in an existing concussion lawsuit.  Certainly, details like those would have to be fleshed out in greater detail.  Nevertheless, the league needs to grab the bull by its horns and consolidate all the post-retirement plans into one mass plan that affords every player some protection.

Finally, and most importantly, the NFL’s admission that CTE’s are linked to playing football should serve as a massive wake-up call to the National Hockey League (NHL) and Major League Soccer (MLS).  The NHL is facing their own headache as a class of former NHL players have filed a lawsuit against the NHL asserting that the NHL failed to warn its players of the effects of repeated concussions which could lead to long-term disabilities.  Meanwhile, a district court judge in California dismissed a concussion lawsuit in 2015 against FIFA and other soccer governing bodies.  Surely, if the NFL is finally admitting in public that there’s a link between playing football and developing CTE, the same goes for the NHL and MLS.  They have to have some knowledge that their respective players are likely to develop CTE from repeated concussions, which are all too common in both sports.  Surely, this is not the players’ faults.  Each league has a legal and moral obligation to care for their players.  Just as the NFL acted negligently in not properly treating their players for concussions, the same goes for the NHL and MLS.

Thankfully, leagues are stepping up to mitigate the circumstances.  For example, the NFL has implemented stringent concussion protocols which ensure that players are properly treated and diagnosed as having a concussion. Major League Baseball has also created their own concussion protocol which requires players to go on a 7-day disabled list if they experience any type of concussive symptom. And in 2015, the NHL and NHLPA agreed to create better measures in evaluating hockey players who experience concussions during games. While implementing these measures are helpful, it will not eliminate the possibility of incumbent concussion litigation.

All in all, the NFL will have its hands full with this latest admission.  It was bound to happen that the “League of Denial” would no longer deny the direct scientific correlation between playing football, enduring repeated head trauma, and developing CTE as a result.  This admission is surely the step in the right direction and we can only hope that progress is made in ensuring proper medical treatment to those players who need help.