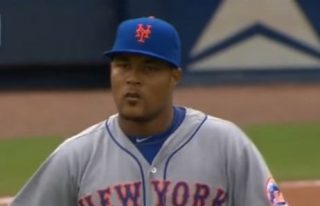 On Thursday, a judge in Fort Lee, New Jersey dismissed a domestic violence case against New York Mets pitcher Jeurys Familia. The all-star closer was arrested on October 31 after an alleged incident that police said left his wife with visible bruises.

Prosecutor Arthur Balsamo met with Familia’s wife, Bianca Rivas, after Rivas arrived at court with Familia. Rivas said that she did not want the case to move forward, and explained that her injuries were not caused by her husband. Rivas reportedly said that a scratch on her chest, which the responding officer saw, was caused by her one-year-old child, and that a bruise on her cheek was self-inflicted. According to ESPN, police found knives on the floor of the home, but Rivas explained that Familia used them to wedge their bathroom door shut while he stayed in there during an argument.

Balsamo told the judge that Rivas was “steadfast that the matter be dismissed,” and the judge did just that. The record of the case was expunged as well. This could help Familia regarding any potential discipline from Major League Baseball, whose policy is to wait for criminal cases to conclude before determining what sort of punishment is warranted, if any. Jau Reisenger, an attorney who represents Familia against the league, said that the case being dismissed and expunged will “weigh with the MLB lawyers.”