Blue Jays Fan Threw Beer Can at Orioles Outfielder, and Police Demand: ‘Turn Yourself In’ 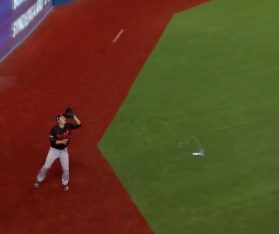 The Toronto Blue Jays and Baltimore Orioles played one of the most exciting playoff baseball games in history on Tuesday night. The back and forth battle went into extra innings and ended in dramatic fashion when Edwin Encarnacion hit a monster walk-off home run to give the Blue Jays the 5-2 victory. Unfortunately, the game was not without controversy, and police in Toronto are now seeking out a fan who went way too far in trying to help his team win.

During the 7th inning with the game tied 2-2, a fan seated near the outfield wall in left-center field appeared to throw a beer can at Orioles left-fielder Hyun Soo Kim as he attempted to catch a fly ball.

Orioles players were understandably furious about the incident. After the game, Kim told USA Today through his interpreter that he was “surprised, and kind of shocked” by the incident and that “[s]omething like [that] should never happen.”

As for the fan, well, it seems they knew they messed up almost immediately. ESPN.com reported a Blue Jays spokesman said the beer throwing fan had apparently bolted by the time stadium security personnel arrived to investigate.

The fan may have escaped the stadium, but the Toronto police made it clear on Wednesday morning that they are not about to let the fan get away scot-free.

This is not the first time a playoff game at the Rogers Centre in Toronto has been marred by Blue Jays fans throwing object on to the field. In a playoff game last year against the Texas Rangers, Blue Jays fans showed their displeasure with an umpires call by littering the field with pretty much anything they could throw. During that especially ugly incident, a small baby seated near the front row was hit with a beer.