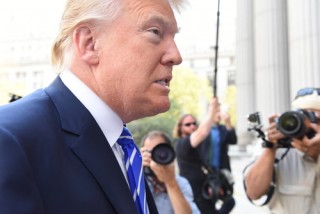 Jill Harth, the woman who accused Donald Trump of sexually assaulting her in the mid-1990’s, has remained relatively mum since Trump announced his candidacy. As we first reported, the former beauty pageant producer filed a $125 million lawsuit in 1997 claiming Trump engaged in offensive sexual conduct towards her from 1992 to 1997 including “groping” her under her dress on several occasions, “forcibly” moving her to his daughter’s bedroom in an attempt to have sex with her, and repeatedly, aggressively and inappropriately propositioning her for sex. Harth withdrew her lawsuit months after filing it, and around the same time Trump reportedly agreed to settle with her then husband over an ongoing contract dispute. Trump has repeatedly denied the assault allegations.

Besides briefly talking to LawNewz.com earlier this year, Harth has stayed pretty quiet about her claims at one point saying she might even vote for Trump. Well, that has all apparently changed. Harth took to Twitter Thursday night to absolutely slam Donald Trump. She called him a liar, and said that she stands by her allegations against him from 20 years ago.

She also responded to The New York Times piece from last month which criticized Trump’s treatment of women.  You might recall that some of the women featured in the story spoke out after the piece ran and asserted that the Times twisted their words. While Harth declined to speak with the Times at the time, some of her claims from the 1990’s lawsuit were included in their story. Immediately following the story, Trump took to Twitter to blast the Times for the “false, malicious and libelous story.”

@realDonaldTrump @nytimes my part was true. I didn’t talk. As usual you opened your big mouth

@realDonaldTrump @nytimes they got how you were with me right. We were on friendly terms. Buried the hatchet, remember? Stop saying I lied

She also responded to Ivanka Trump’s recent interview on CBS in which she said her father “was not a groper.”

“I was quiet. Your dad had to further denigrating (sic) me but I’m not taking it from you, too,” Harth said in a Tweet.

“Bad enough I had to go through sexual harassment over 20 years ago and now its all public,” she tweeted, “Ivanka stop trying to protect you dad. I used to admire you until you called me a liar.”

We spoke to Trump’s attorney Michael Cohen in February about the allegations when the story first surfaced and he seemed to be relying, in part, on Harth’s own statements and actions since the suit was withdrawn: “There is no truth to the story at all. The plaintiff in the matter, Jill Harth, would acknowledge the same. You will see the case was voluntarily dismissed without prejudice. There is no truth to it,” he said. Jill later said she has “never” disavowed the complaint to anyone.