Phil Houston is CEO of QVerity, a training and consulting company specializing in detecting deception by employing a model he developed while at the Central Intelligence Agency. He used this model to analyze last night’s Republican debate. His colleague Don Tennant contributed to this report. 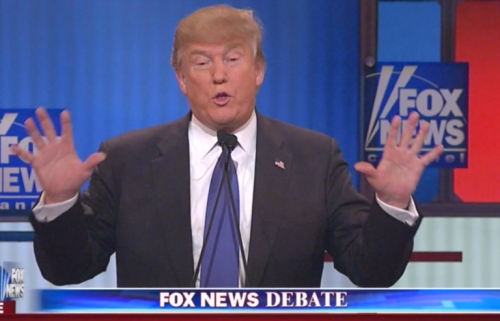 It was during a discussion of the contentious issue of immigration policy at Thursday night’s Republican debate that Fox News Channel co-moderator Megyn Kelly encapsulated Donald Trump’s campaign strategy.

Chiding Trump for flip-flopping on the issue of bringing highly-skilled workers from other countries into the U.S., and for his refusal to release the transcript of his recent behind-closed-doors meeting with The New York Times, in which he reportedly suggested that he would not stand behind his public position on immigration, Kelly zeroed in on what’s to come as a result.

“[That] will have some asking whether, on your immigration policies, you are really just playing to people’s fantasies, which is a tactic you praised in your book, ‘The Art of the Deal,’” she said.

Kelly was spot on with her recognition of Trump’s efforts to manipulate the American electorate. What’s important to understand, however, is that if Trump is just playing to people’s fantasies, what these fantasies stem from are the frustrations people feel with the political establishment. If there is one word that defines the 2016 political campaign, it is, beyond a doubt, frustration. And Trump’s strategy is clearly to prey on that frustration.

Arguably, the cornerstone of Trump’s success in this campaign is his trademark attacks on anyone who crosses him. The brilliance of these attacks, regardless of how unpleasant or unpalatable any of us might find them, lies in the immediate validation they provide to so many people who are frustrated to the point of contempt for the dysfunctionality of Washington. And there is a very tangible benefit that Trump derives from them.

That benefit is the remarkably high level of deception that these attacks enable Trump to accomplish. He is consistently able to diminish others, while at the same time enjoying a means to escape from answering the important policy questions that would allow voters to evaluate his potential effectiveness. Not surprisingly, there were glaring examples in Thursday night’s debate.

In response to a question from co-moderator Chris Wallace about jobs creation, Marco Rubio suggested that Trump “can start tonight by announcing all the Donald J. Trump clothing will no longer be made in China and in Mexico, but will be made here in the United States.” Asked by Wallace to respond, Trump was in top form.

“This little guy has lied so much about my record,” he said.

To his credit, Wallace pressed Trump on the question of whether he would move the manufacturing of his clothing line from China and Mexico to the United States. Trump’s response was to attack the countries where the clothes are made.

Wallace also challenged Trump on numbers he had released with respect to cutting the deficit, pointing out that those numbers “don’t add up.” Rather than responding to that challenge, Trump launched into an attack on Congress and the pharmaceutical industry.

“Let me explain something,” he said. “Because of the fact that the pharmaceutical companies are not mandated to bid properly, they have hundreds of billions of dollars in waste. We don’t bid properly—we don’t have proper bidding procedures. The reason we don’t is they take care of all of the senators, all of the congressmen, and they don’t go out to bid.”

That these responses failed to address the questions is almost a moot point. They accomplished what they were meant to accomplish: They brought Trump a step closer to political nirvana—to being everything to nearly everyone. No doubt, that strategy is an underlying premise of political campaigning in general. And no doubt, politicians almost always rely on deception to accomplish it. Unfortunately, the American electorate has come to accept that as a fact of life.

Trump’s attacks have come to not only validate, but soothe, the frustrations of many with untrained ears. What must be recognized is that these same attacks mask the fact that Trump fails to answer almost every question that’s posed to him.

Trump has employed this strategy throughout the campaign, and it continued to be his go-to strategy throughout Thursday night’s debate. There’s little doubt that if such a strategy were attempted in a court of law, Trump’s evasiveness would assuredly be recognized, and he would likely be convicted by most any jury, irrespective of the charge.

In the 2016 campaign’s court of public opinion, however, that evasiveness has been entirely overlooked, or simply forgiven. After all, the thinking goes, don’t all politician’s lie?  Trump was certainly not the only candidate in the debate who failed to answer questions. It’s the attack behavior that routinely accompanies that failure that is so distinctive in Trump’s case. And it’s working—for now, at least. A lot of voters are reveling in the short-term satisfaction they derive from hearing Trump’s validation of the concerns they have about the many serious problems our country is facing.