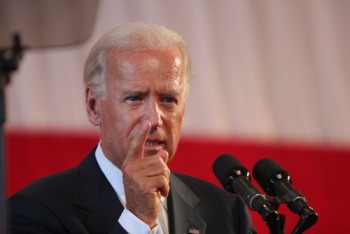 Vice President Joe Biden will speak at the Georgetown Law Center on Thursday where he is expected to fight back against Senate Republicans who have spent the past several weeks citing the “Biden Rule” as a justification for not moving forward with confirmation hearings on Supreme Court nominee Merrick Garland.

As LawNewz previously explained, the “Biden Rule” refers to a 1992 speech on the Senate floor where then-Sen. Biden, as chairman of the Senate Judiciary Committee, warned President George H.W. Bush against trying to nominate a Supreme Court Justice in an election year.

“It would be our pragmatic conclusion that once the political season is underway, and it is, action in a Supreme Court nominee must be put off until after the election campaign is over,” Biden said back in 1992.

According to an excerpt of the speech obtained by Politico, Biden will directly confront the issue and argue that Republicans have distorted his record as the Senate Judiciary Committee Chairman.

“In my time as the ranking Democrat or as chairman of the Senate Judiciary Committee, I was responsible for eight nominees to the Supreme Court — some I supported, others I voted against,” Biden will say. “And every nominee, including Justice [Anthony] Kennedy — in an election year — got an up or down vote by the Senate. Not much of the time. Not most of the time. Every single time.”

Last Sunday, Senate Majority Leader Mitch McConnell reaffirmed his previous promise to not hold a hearing on the Garland nomination and it is unlikely that Biden’s speech will do much to change the official GOP position on the issue.