Trump Said He Forgave His Campaign Loan, But He Really Didn’t 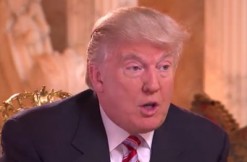 Remember when Donald Trump said he forgave the loan he made to his presidential campaign? That hasn’t happened yet, NBC News reported on Thursday. Apparently, the Federal Election Commission said it had no evidence the candidate followed through on his promise.

In an interview published on June 24, Trump told NBC’s Lester Holt that he “already forgave” the loan he’d issued to his own campaign.

“Well, you always do it as loans, and then you terminate the loan,” later clarifying, “I’ve already terminated it.”

That was from last Thursday, June 23. But an FEC employee recently told NBC the Trump campaign still treated the loan as a loan, and not a gift as of the last filing on June 20. There hasn’t been any new filed since then. As things stand, Trump can legally use campaign donations to pay himself.

Hicks recently told NBC the loan-forgiving paperwork will be “filed with the next regularly scheduled FEC report.” The next filing deadline is July 20. The FEC’s records state that as of May 31, Trump had loaned about $45.7 million to his campaign. This made over 70% of total receipts.
–