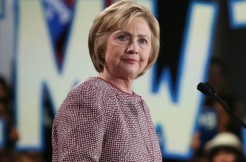 Everyone gets spam emails with shady links. You. Me. Former Secretary of State Hillary Clinton. And, no, this one didn’t come from Anthony Weiner either.

The FBI just released the summary of their investigation into her alleged mishandling of emails while serving as the USA’s top diplomat. Clearly, she’d be a big target for hackers, and several such attempts were mentioned in the feds’ report. In one instance, she received a phishing email from the personal e-mail account of a certain State official. The message contained a suspicious link. Clinton replied, asking “Is this really from you? I was worried about opening it!”

Another time, aide Huma Abedin wrote an e-mail, saying Clinton worried “someone [was] hacking into her email.” That’s because Clinton got an email from an associate’s account that had a link going to “a website with pornographic material.” The FBI said they had no other information that this was a legit hacking attempt. Most of the next two lines after that are redacted, but after that: “Open source information indicated, if opened, the targeted user’s device may have been infected, and information would have been sent to at least three computers overseas, including one in Russia,” the report stated.

This last quote doesn’t make a lot of sense in context. It may refer to information in the redacted lines. Check out the report below. The relevant parts occur in the end of page 30 and beginning of page 31.

On page 2, the FBI said they found no evidence she’d even been successfully hacked. But they admitted they could not confirm nothing took place:

However, investigative limitations, including the FBI’s inability to obtain all mobile devices and various computer components associated with Clinton’s person e-mail system, prevented the FBI from conclusively determining whether the classified information transmitted and stored on Clinton’s personal server systems was compromised via cyber intrusion or other means.

It’s worth mentioning the hacker Marcel “Guccifer” Lazar claimed to have hacked Clinton, but federal officials denied it ever happened.

[image via Krista Kennell and Shutterstock]
–