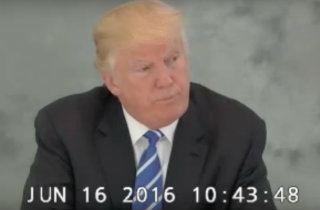 President Elect Donald Trump is set to give videotaped deposition testimony in another one of the many lawsuits against him and his companies, and he’s getting very insistent as to how the testimony is taken. According to a new report in USA Today, the deposition, set for just before his his inauguration in January, will be taking place at Trump Tower by Trump’s request, citing “security reasons” in addition to cost and convenience. Where this gets a bit strange is that the deposition was originally scheduled to be conducted in Washington, DC, where the case was filed stemming from a chef pulling his restaurant from Trump’s new hotel.

“It seems dubious that the President-elect cannot be afforded adequate security in the capital of the United States, but Defendants are willing to accommodate that demand,” wrote attorneys for chef José Andrés, who Trump sued for breaking their deal. While his lawyers were willing to accept the location terms, they were less amenable to the changes that Trump’s counsel wanted to make to the content of the deposition like shortening the time limit from seven hours. In their opposition, Andrés’s lawyers wrote that “Defendants cannot, however, accept Trump LLC’s attempt to hamstring Defendants’ questioning of the man who directed the bringing of this lawsuit.”

If this restaurant business sounds familiar, it’s because the Trump deposition that got some play over the summer was from a similar lawsuit that Trump filed against Geoffrey Zakarian, another celebrity chef. Both chefs cited Trump’s comments about Mexican immigrants as the impetus for backing out of their deals to run restaurants at Trump’s new Washington hotel, built at the site of the city’s old post office. Trump is accusing them of breaching their contracts. The chefs also claimed in court documents that they might have difficulty finding staff due to the number of Mexican-Americans averse to Trump.