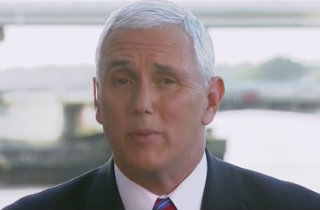 Mike Pence, the Republican candidate for vice president, appeared on NBC’s “Meet the Press” with Chuck Todd on Sunday morning. To close the interview, Todd asked Pence about Donald Trump’s increasing rhetoric about the presidential election being rigged (especially if he doesn’t win.) Specifically, Todd questioned the VP candidate whether he would  accept the results of the election.

“We will absolutely accept the result of the election,” Pence said. “Look, the American people will speak in an election that will culminate on November the 8th. But the American people are tired of the obvious bias in the national media.” As Pence continued going off on his perception that the media was attacking Trump in lieu of investigating the Clinton Foundation, Todd, as a member of the media, tried to get a word in edgewise.

“Governor, you keep saying ‘rigged election.’ Are you concerned that the more you say it, the more you actually undermine our democracy unintentionally?” Pence didn’t directly answer the question:

One of the great, great parts of democracy is a peaceful transfer of power, and I expect that things are going to be as rough as they are going right into November 8th, because the stakes are so high in this election. But as Donald Trump said in the first debate, we will accept the will of the people, but from now to Election Day, we will work our hearts out against all odds and most of you in the national media and we will lay out a story for a more stronger and prosperous america.

There has been increasing concern over Trump’s comments about “rigging elections,” which include tweets this morning before Todd’s interview with Pence:

Even in elections where there is legitimate evidence of fraud, there are differences of opinion on how to handle it. Back in December, when The New Yorker profiled Secretary of State John Kerry, the magazine quoted him explaining to former Afghani presidential candidate Abdullah Abdullah why it would be best for Afghanistan not to challenge the results of the election that he lost:

I will share with you a very personal experience: When I ran for President of the United States, in 2004, against George Bush, in the end, on Election Day, we had problems in the state of Ohio on how the votes were taking place. I even went to court in America to keep polling places open to make sure my people could vote. I knew that even in my country, the United States, where we had hundreds of years of practicing democracy, we still had problems carrying out that election.

The next afternoon, I had a meeting with my people, and I told them that I did not think it appropriate of me to take the country through three or four months of not knowing who the President was. So that afternoon in Boston I conceded to the President and talked about the need to bring the country together.

One of the main lessons from this is there is a future. There is a tomorrow.