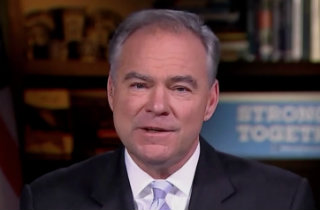 On Sunday morning’s edition of “This Week with George Stephanopoulos” on ABC, fill-in host Martha Raddatz, who co-moderated last week’s presidential debate, interviewed Democratic vice presidential candidate Tim Kaine. As the hottest topic in the election, the interview looped around to the numerous sexual assault allegations against Republican candidate Donald Trump. Raddatz asked Kaine if, to counter accusations from the Trump side, he could “unequivocally” deny involvement from the Clinton campaign.

“Absolutely. These are folks who, frankly, saw Donald Trump look America in the face when you and Anderson Cooper were engaging in the debate last Sunday night,” Kaine said. “And when he was asked directly, ‘Listen, you’re caught on tape saying some of the grossest stuff about the way you treat women. Did you actually act that way?’ And he didn’t want to answer the question, but you kept pressing, and he eventually said ‘No, those were my words, but I didn’t act that way toward women.’ As soon as he looked folks in the face and said ‘those are not my actions, that was, essentially, the invitation for people who knew otherwise to come out and say ‘Wait a minute, I’ve had an experience with Donald Trump.’ That’s what’s going on. It’s not because of our campaign.”

Trump’s latest claims came in the form of a tweet storm Sunday morning that included this comment:

Polls close, but can you believe I lost large numbers of women voters based on made up events THAT NEVER HAPPENED. Media rigging election!