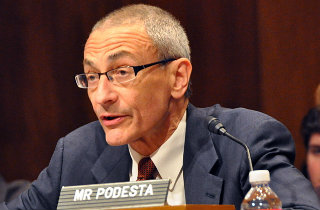 On Sunday, Wikileaks continued its release of emails from John Podesta, the chairman of Hillary Clinton’s presidential campaign. The latest dump includes one message, sent during the immediate aftermath of last year’s mass shooting in San Bernardino, California, that particularly casts Podesta in a light that Republicans can easily seize on. In a December 2nd email, chain, Clinton campaign staffers were forwarding this tweet from MSNBC’s Chris Hayes:

NBC News now reporting a US citizen named Sayeed Farouk believed to be one of the people involved in the shooting.

Matt Ortega, the liaison between the campaign’s digital team and communications staff, sent out the tweet without comment, while Senior Spokesperson Karen Finney just said “Damn.” Podesta himself then chimed in with this:

Better if a guy named Sayeed Farouk was reporting that a guy named Christopher Hayes was the shooter.

The implication, in large part from Podesta’s tone, looks to be that he was concerned about the political implications of the shooter being a Muslim (and potentially a terrorist). It’s possible that he’s just expressing concern about the overall fallout if it were to turn out to be a terorist attack (as it did), but the glibness of what he said suggests that he was referring to the politics of the situation more than national security.

LawNewz has reached out to both the Clinton campaign as well as Podesta (via the address he was using at the time of the above email), and will update this space if either comments on this article.